Back in November I posted about a protest by Downtown artists facing eviction. I’d been wanting to follow-up, so earlier this month I went to a gathering at 800 Traction to check in with the folks there. Unfortunately, there’s not a lot to report. The artists who’ve been living and working in this building for years, in some cases for decades, still don’t know what the future holds for them. They’ve hired a lawyer, and negotiations with the developer are currently underway. No one had any current news about The Artists’ Loft Museum Los Angeles (ALMLA), which is a short walk away, at 454 Seaton. This is another group of creative people who have called the area home for years. They were served with eviction papers in 2017, and have been wrangling with lawyers since then.

But I wanted to write a post anyway, if only to keep this situation in peoples’ minds. As gentrification continues to spread across LA, the pace of evictions is accelerating. Evictions from apartments covered by the Rent Stabilization Ordinance (RSO) have been increasing for years, with 1,824 units taken off the market in 2017 alone. Over 23,000 RSO units have been lost since 2001. But this only tells part of the story, since there’s no mechanism in place to track the number of tenants who are forced out of non-RSO units. It’s commonplace these days for people living in a building not covered by rent control to find that the landlord has suddenly hit them with an exorbitant increase. If they can’t pay, they have to leave, and no one has been keeping track of how often that’s happened in recent years. If you’re not covered by the RSO, you have no protection. Unfortunately, that’s the case for the artists at 800 Traction.

So many people have highlighted the irony of an Arts District that’s forcing artists out, it seems redundant to bring it up again. The folks at City Hall certainly don’t care. They’ve been actively assisting real estate investors in a massive overhaul of the area. The change in the neighborhood’s vibe is both striking and depressing. Even going back just 10 years, I can remember aging warehouse spaces filled with struggling artists who didn’t have much money, but who had still managed to create a lively community. Most of those people are gone now. And where there used to be cheap dive bars and funky little stores, now the streets are being taken over by clothing shops and chain restaurants. More and more these days the neighborhood seems like a giant outdoor shopping mall. 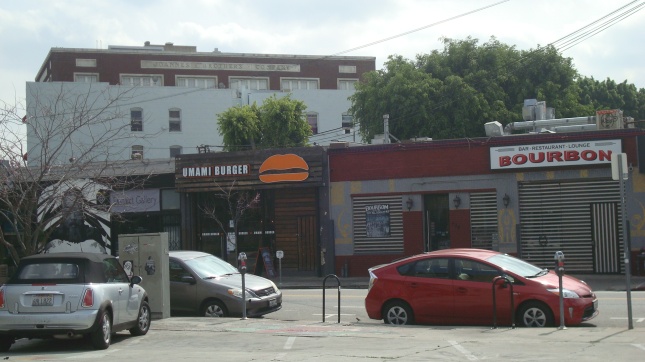 The people at City Hall keep talking about how they want to create vibrant communities, and insist that the onslaught of high-priced apartments and upscale retail is helping to achieve that goal Downtown. In reality, what they’re doing is creating enclaves for the affluent that automatically exclude anyone making less than $70,000 a year.

If these artists are eventually forced out of their homes, it’ll be one more win for the developers. And a huge loss for LA.

Artists are being forced out of the Arts District. This isn’t news. It’s been happening for years. The news is that now the artists are fighting back.

On Saturday, November 4, two groups of artists facing eviction organized a parade to bring attention to the rampant displacement that threatens their community. Earlier this year the residents at 800 Traction were told by the new owners of the building that they’d have to leave. Also this year, the people behind the Artists’ Loft Museum Los Angeles (ALMLA) were hit with a steep rent increase that seems intended to force them out. So the two groups have gotten together to let the world know that they’re not going quietly.  On Saturday, November 4 they staged a parade through Downtown. 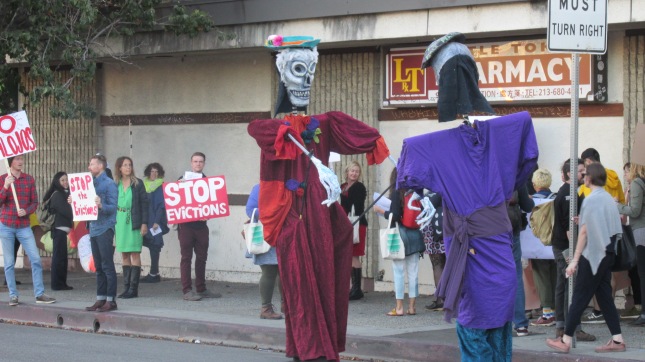 The parade started in Little Tokyo.

Took a right on Alameda.

Then the protesters headed down Alameda toward Fourth.

The parade started in Little Tokyo, cut down Alameda to Fourth, then wended its way along Seaton, Fifth and Hewitt, finally winding up at 800 Traction. It was an interesting walk. Protesters waved signs and displayed artwork. Two giant skeleton figures towered over the crowd. A few cars honked to show their support.

A momentary pause on Alameda. 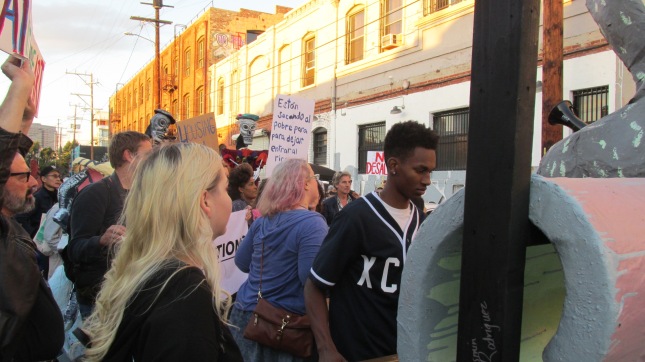 And then up Merrick.

We passed in front of the building that holds ALMLA, which is actually a brand new enterprise. Michael Parker and Alyse Emdur have lived in this space, along with other artists, for 16 years. Parker says that in just the last 6 years their rent has risen by 200%. The latest increase is beyond what they can pay, and Parker believes it was designed to force them out. So the artists at 454 Seaton decided to create ALMLA, which they hope will draw attention to their situation, and to the larger wave of displacement that’s sweeping across Los Angeles. Just before the museum’s opening, the landlord went to court to shut the event down. Fortunately he failed.

I used to hang out in this area back in the 80s and 90s. It’s depressing to see some of the changes that have taken place. While most of the buildings remain, with the onslaught of gentrification many of them now house chic boutiques and pricey restaurants. Anonymous LLCs have bought up a lot of the real estate, and investors seem bent on turning this part of Downtown into something very close to a suburban mall.

Shop in the Arts District. 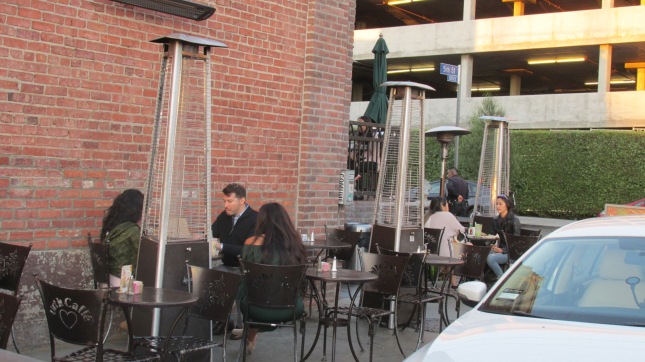 Eat in the Arts District.

Like I said, we ended up back at 800 Traction. A number of the artists who live in this building have been here for decades. Some were among the first wave of artists to move to the area back when it was more or less a decaying industrial ghost town. And most of the current residents at 800 Traction are part of the Japanese-American community, which is crucial to this story. This community has hung on in spite of successive waves of forced displacement going back to WWII. In the early part of the 20th century, Little Tokyo stretched far beyond its current boundaries. There were numerous Japanese-owned businesses and Japanese cultural institutions in the area between Alameda and the LA River. The first assault was the internment of Japanese-Americans after Peal Harbor. Since then City Hall has carved out one piece after another. And now these artists, after years of working within the community, are threatened with eviction.

A performance featuring two of the Downtown elite enjoying a round of golf.

They seemed to agree that gentrification wasn’t happening fast enough.

Hanging out with the other party guests, I felt like the room was filled with a kind of giddy energy, but there was also an undercurrent of tension. I spoke with Nancy Uyemura and Jaimee Itagaki, and they gave me the latest news about 800 Traction. The building’s new owners, DLJ Real Estate Capital Partners, had hired a property management firm, Pearson, that seemed intent on sabotaging the gathering. Pearson had called the cops before the party, apparently believing they could shut it down, but it went on as planned. They also sent security guards to keep an eye on the tenants and guests. Harrassment in situations like this is commonplace, and Pearson is doing their best to make things uncomfortable. Uyemura said that the tenants at 800 Traction were told in May that they had to leave, and they were supposed to be out by August. Recently they received an unlawful detainer notice. Their hearing date is in December.

Protesters gathered at 800 Traction after the parade.

I hope the security guards enjoyed the party.

The attempt to evict the artists at 800 Traction is bad enough, but there’s another layer to this story that makes it even more disturbing. DLJ has decided to go through the process of designating the building a Historic-Cultural Landmark, which will enable them to get significant tax breaks for renovating the structure. They hired GPA Consulting to do the research for the nomination. GPA’s report talks at length about the building’s architect and Beaux Arts revival style and the food processing industry. They even mention Al’s Bar and LACE. But somehow they completely avoid any mention of the Japanese-American community that thrived in the neighborhood for decades. They also neglect to mention that the current residents have deep ties to the current Japanese-American community, and that some of them were among the first artists to move to the neighborhood back in the 80s.

In other words, GPA’s report completely whitewashes the community’s history. At the Cultural Heritage Commission (CHC) hearing where the nomination was considered, some attendees pointed this out, among them Dorothy Wong, herself a preservation consultant. Wong was baffled by the fact that the report didn’t refer to Little Tokyo once, and made no mention at all of the Japanese-American artists who had lived and worked at 800 Traction for decades. To their credit, the CHC agreed that the report was incomplete and chose to defer their decision until further work was done.

This may seem like a small victory, but it goes to the heart of what’s happening in Downtown. Ruthless investors are kicking artists and others out of the area so they can turn it into a sanitized, upscale urban destination. The Mayor and the City Council are doing everything they can to help make that happen. The people who have lived and worked in the area for much of their lives, the people who built communities and kept them going through tough times, are being told to leave. And while City Hall makes a great show of preserving historic structures, they’re destroying the communities that gave those structures life.

It’s hard to say whether the artists at 800 Traction and ALMLA will win this battle. They’re a determined group, and they seem committed to fighting til the bitter end. But LA has become increasingly hostile to artists, and the Mayor’s vision for Downtown is all about handing the area over to developers.

What have real estate investors put into this community? Money. What do they want out of it? More money.

What have the artists put into this community? Their lives. And what do they want? To continue working with and for the community, as they’ve been doing for years.

Find out more by following these links.