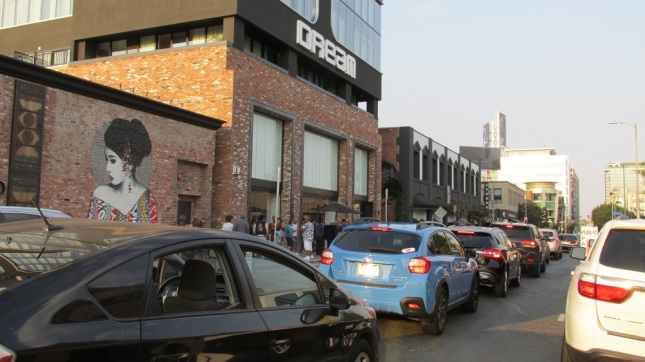 The other day I picked up a copy of the LA Weekly and came across Besha Rodell’s review for Tao in Hollywood. Clueless loser that I am, I’d never heard of this popular mini-chain before, and had no idea it had been a huge success in New York and Las Vegas. Tao’s latest location is tucked into the just-opened Dream Hotel in Hollywood, and it seems to be doing big business. But Rodell wasn’t impressed. At all. You can read his review here.

Worse Than We Imagined from LA Weekly

Reading Rodell’s description of the decor’s garish excess and ridiculously inflated prices, I felt like his review could apply to a lot of what’s happening in Hollywood these days. The Dream Hotel and Tao just seem like the latest in City Hall’s efforts to wreck the community. 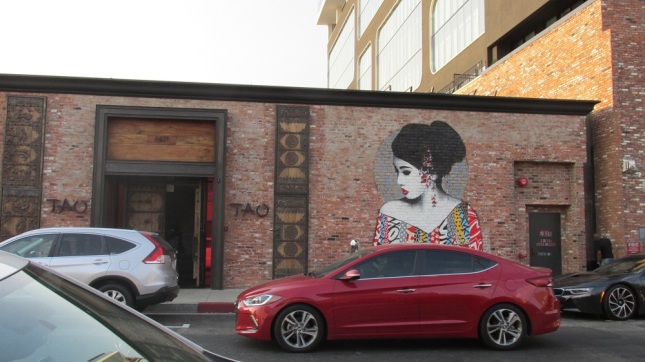 Tao on Selma in Hollywood

Does that sound extreme? And does it sound strange to be railing against garish excess in Hollywood? Hasn’t that been Hollywood’s game all along? Certainly if you look at the movie industry’s output, from the lurid spectacles of the 20s to this summer’s CGI-fueled action flicks, you’ll find plenty of outrageous, vacuous entertainment. You could also point to the sumptuous nightclubs and decadent nightlife that flourished during the studio era, when gossip columns were filled with the shameless antics of movie stars.

But the studio era ended decades ago, and over the years the place called Hollywood has grown into something very different. For a long time now it’s been a low to middle-income community with a fairly dense mix of residential and commercial. The movie stars are long gone, but there are lots of hardworking people here, people who run small shops and family-owned restaurants. Would-be actors and actresses who knock themselves out waiting tables while trying to get auditions. Kids who walk to school on streets where they have to learn early to look out for themselves.

And these people are struggling harder than ever because the City seems to be doing everything it can to push them out of Hollywood. What these people need more than anything is housing they can afford, and instead the City keeps approving high-end mutli-family projects that most Hollywood residents could never hope to move into. Yes, some affordable units have been created in recent years, but the wave of evictions continues, and we’re still losing scores of rent-stabilized apartments.

And with all this going on, the City decides we need over a dozen new high-end hotels? With multiple bars? Rooftop decks? Live entertainment? In some cases right up against apartment buildings? Really?

The City has long said that one of the key components to its plan to revitalize Hollywood is to boost the night life, but how’s that working out? I like a drink as well as the next guy, but last time I counted there were 67 places that serve alcohol in Central Hollywood. It’s not hard to get a drink here. And still the City continues to approve new liquor permits, even though violent crime and property crimes have been rising steadily in the area since 2014. Are you wondering if there’s a connection? Actually there are years of research that show a strong connection between alcohol and crime. Check out this report from the Department of Justice if you’re skeptical.

And then there’s the traffic. Every time the City approves one of these projects, planners insist it won’t have any significant impact on congestion because Hollywood is a transit hub. The hotel guests and the partiers won’t need to drive because they can ride the bus instead. Well, take a look at these photos I snapped in front of the Dream Hotel around seven o’clock on Saturday night. 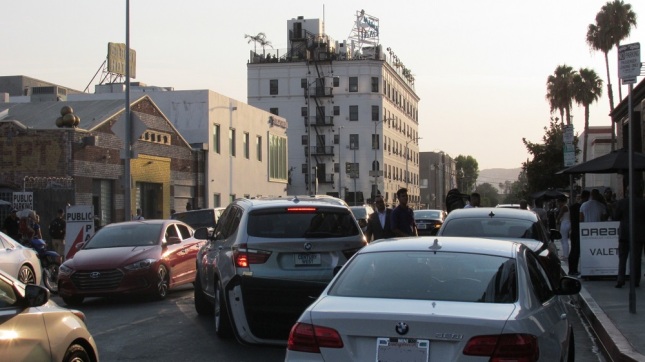 Cars lining up in front of the hotel. 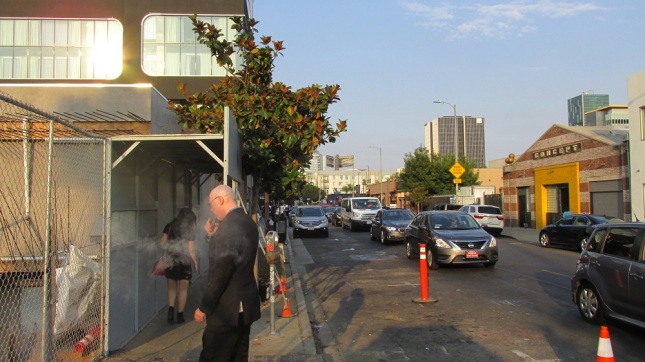 The line of cars continues west on Selma.

And now let’s take a look at traffic a half a block away on Cahuenga. 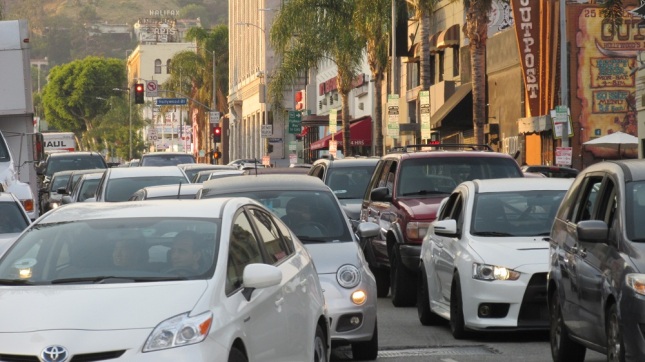 A shot of traffic on Cahuenga, facing Hollywood. 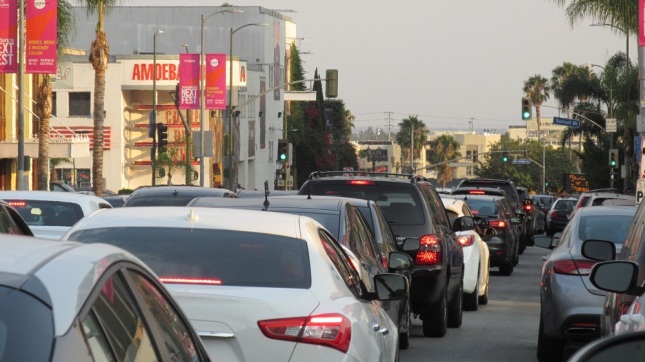 A shot of traffic on Cahuenga, facing Sunset.

Remember, this is not a weekday at rush hour. This is early evening on a Saturday. Somehow I don’t find the City’s claims about people taking transit to be completely credible.

It used to be the club scene in Hollywood was mostly concentrated on Cahuenga. But the City wants to change that. Selma used to be a fairly quiet street running through a largely residential neighborhood between Vine and Highland. There’s a senior center about a block and a half away from the Dream Hotel. And there’s an elementary school about two blocks away in the other direction. But the City doesn’t seem too concerned about the elderly or the children living in the neighborhood. Our elected officials are going to turn Selma into a party corridor. A few years back Mama Shelter opened up, now the Dream, and the City Planning Commission (CPC) recently approved the tommie, an eight-story hotel featuring 2 bars, a rooftop deck, and live entertainment. It didn’t bother the CPC at all that Selma Elementary is less than 500 feet away from this latest project.

And you haven’t even heard the best part. Just blocks away, a developer is planning to build the massive Crossroads Hollywood project, and they’re asking for a master alcohol permit to allow 22 establishments to serve alcohol. You read that right. Twenty two. And not only is Crossroads Hollywood in close proximity to Selma Elementary, it’s right across the street from Hollywood High School. 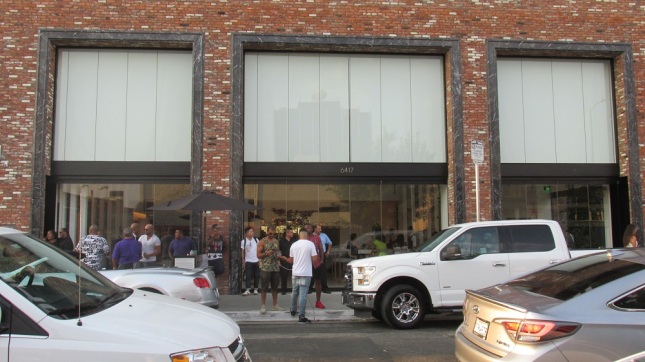 The front of the Dream Hotel.

This is the City’s idea of revitalizing Hollywood. We need low-cost housing. They give us high-end hotels. We need relief from violent crime. They keep pouring on the alcohol. Meanwhile traffic is worse than ever, transit ridership continues to decline, and the number of homeless keeps growing. 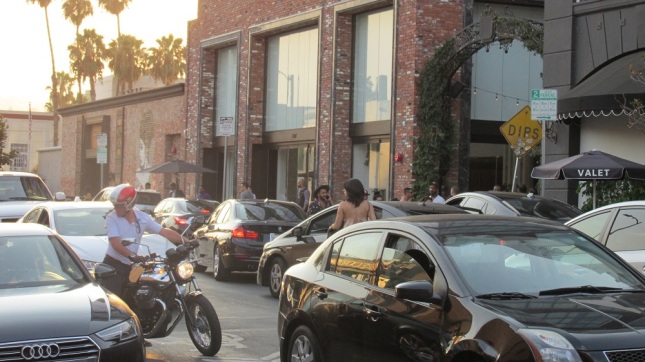 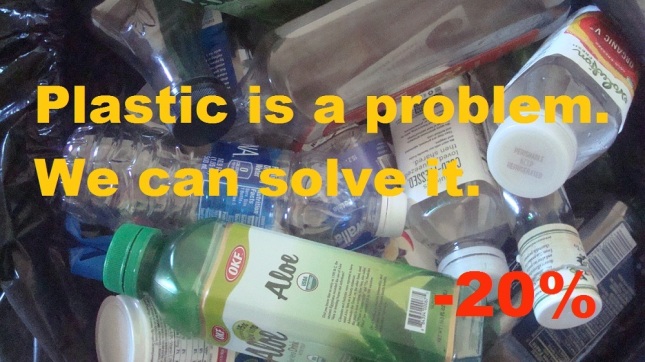 You probably already know that manufacturers use fossil fuel to make plastic.  And you’ve probably already heard the horror stories about how plastic waste is trashing the environment.  Even if you recycle the plastic you use, remember: It’s not biodegradable.  It doesn’t go away.

So there’s only one answer to this problem.  We have to use less plastic.

Can you cut the amount of plastic you use by 20%?  Can you go even further?  You may already be taking reusable bags when you go shopping.  You may already be looking for products that use less packaging.  And there’s one more step you may want to take, if you haven’t already….

Drinking bottled water is one of the most wasteful things we do as a nation.  In addition to producing tons of plastic waste, trucking it around and keeping it cold burn a ridiculous amount of energy.  And with rare exceptions, the water you get from your tap is just as healthy as anything you get out of a bottle.  If you want to know more, check out this article from National Geographic.

Why Tap Water Is Better from National Geographic 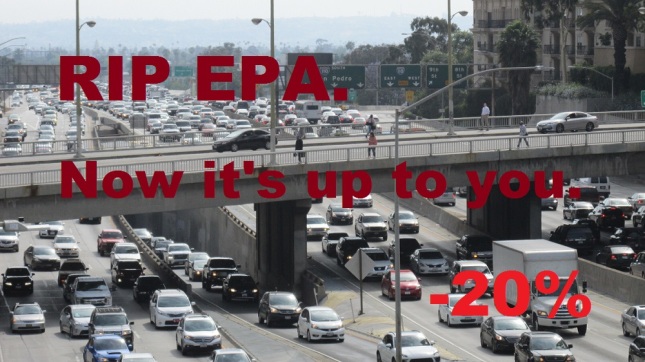 If you’ve been following the news, you know that the Environmental Protection Agency is dead.  Founded in 1970 to protect the environment and human health, the EPA has played a major role in making our air clearer and our water cleaner for over four decades.

But that’s over now.  Since the appointment of a climate change denier as the agency’s administrator, the EPA has gutted protections for wetlands, slashed spending on research, and fought to delay enforcement of methane regulations.  And this is only the beginning.

So if you believe climate change is real and that we need to reduce our use of fossil fuels, you can’t look to the federal government any more.

If you own a car, you could start by driving 20% less.  If all Americans who believe climate change is real took this simple step, it would send a powerful message to the oil companies and the White House.  Ask your boss to let you telecommute on Fridays.  Or take transit one day a week.  Or talk to your co-workers about carpooling.  And there are other things you could do, too.  Think about the trips you take when you go out to shop, have fun, or hang with friends.  If you really put your mind to it, you might be able to reduce your driving by more than 20%.

If you don’t take action, who will? 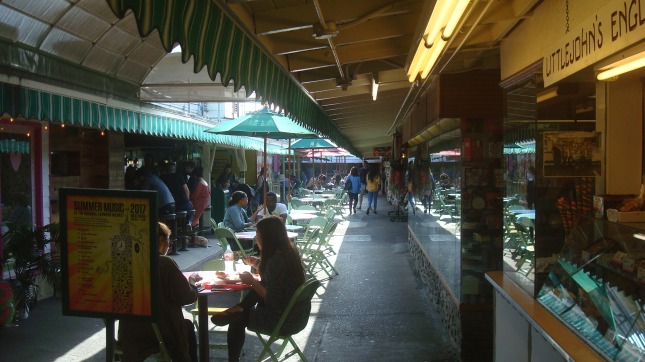 Last weekend I met a friend at Farmers Market. We had a couple beers, hung out and talked. It felt like summer, and I don’t just mean the weather. Lots of people were out and about. There was a relaxed, low-key vibe. Everybody seemed to be having a good time. 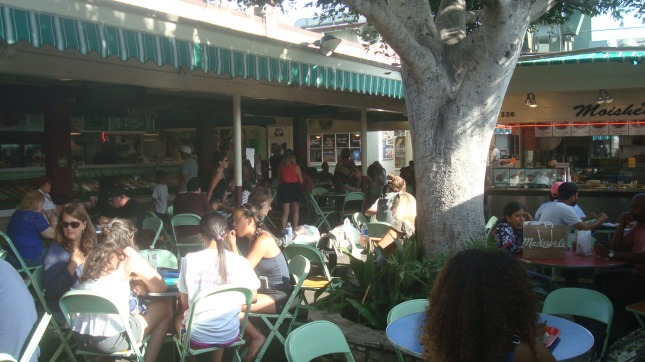 The crowd at Farmers Market on a Saturday afternoon 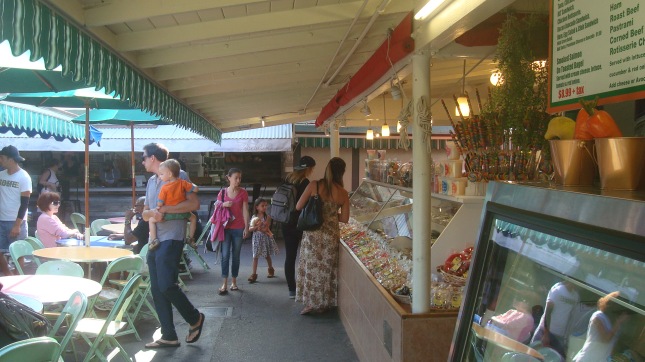 Lots of families were out and about. 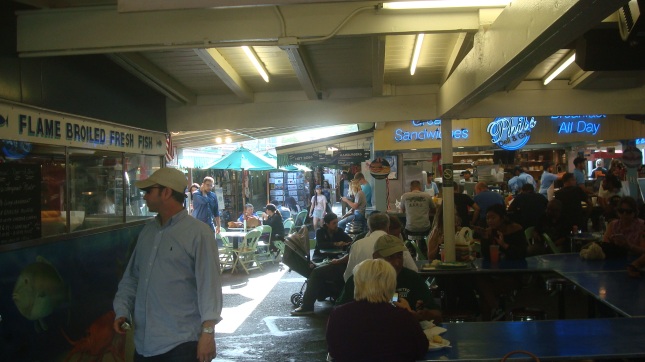 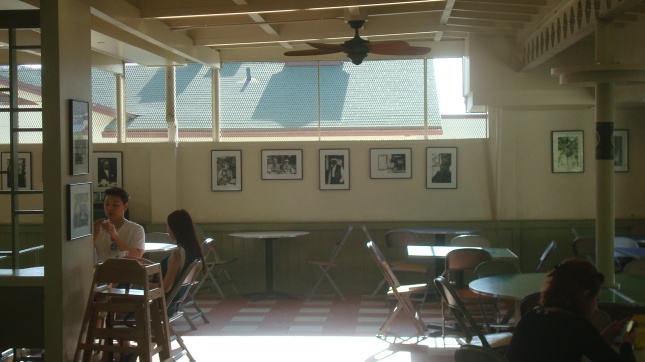 …but you can still find a few quiet spots.

I’ve been going to Farmers Market since I was a kid. I used to go there with my grandmother. When I got older it was a place to meet friends for breakfast or lunch. For years a friend and I made it a habit to catch Ranch Party on Saturday nights. 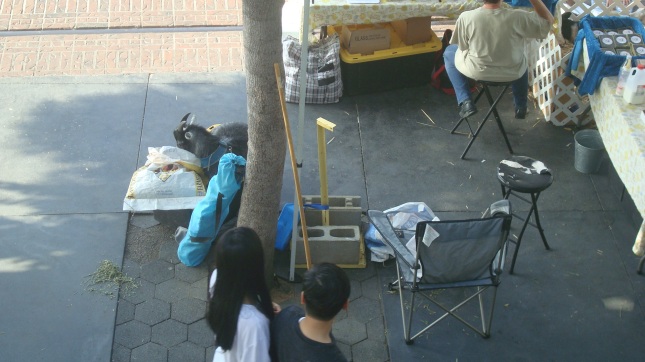 I wasn’t the only one surprised to see this goat having his lunch. 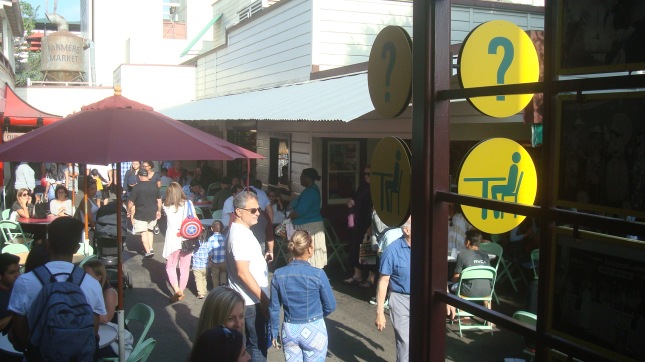 The weather was warm, but not really hot.

The property has been owned by the Gilmore family since the 19th century, but the Farmers Market didn’t get started until the 30s. It began informally as a place where farmers could sell their produce during the Depression. Gradually stalls and restaurants sprang up, and it became a fixture of life in LA. If you’d like to learn more, the Farmers Market web site has a number of articles about the site’s history, as well as a short video. 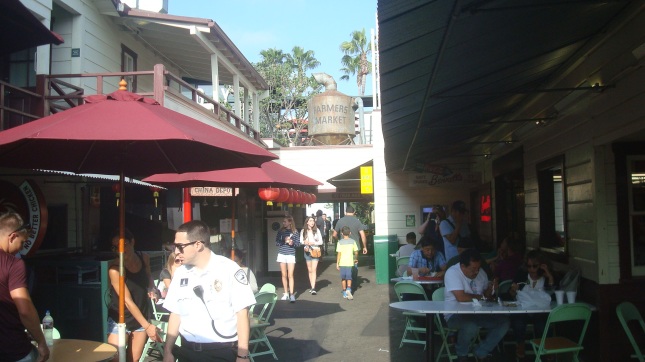 Security was on the job. 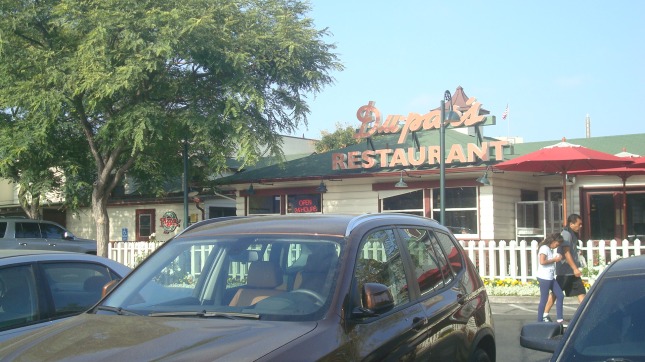 Dupar’s has been there forever.

One of the things I love about Farmers Market is that there’s a sense of tradition. While there are some new restaurants and shops, many of them have been there for decades. You can find concerns that are family-owned, where two or three generations are still involved in running the business. In a town where chain stores are the norm, and pop-up shops are increasingly part of the landscape, it’s cool to see restaurants and shops that family members have invested their lives in. 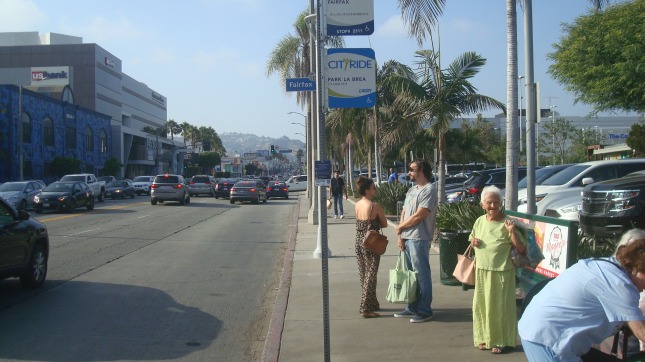 Waiting for the bus on Fairfax.

We finished our beers, my friend left, and I wandered around for a while taking photos. Then I decided it was time to move on, so I walked out to Fairfax and caught the bus home. 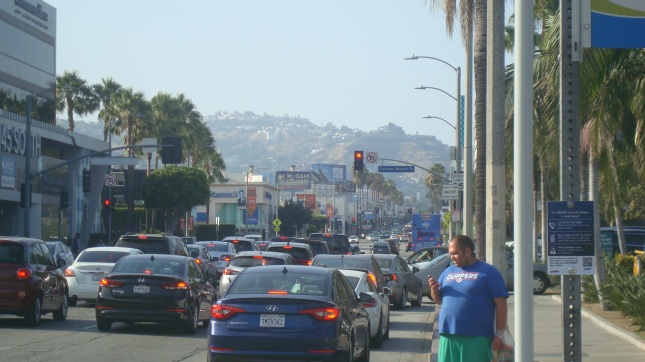 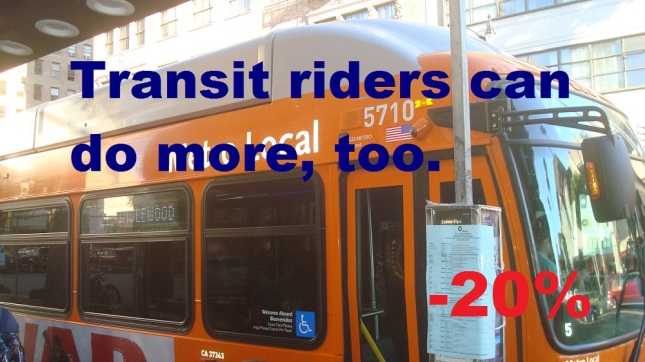 So far this campaign has mostly been about getting car owners to reduce their time on the road by 20%.  Transit riders may be thinking, “Hey, I’m already riding the bus to work.  I’m doing all I can.”

Actually, there is more you can do.

While riding transit instead of driving will help reduce greenhouse gas emissions, busses are still doing plenty of damage to the atmosphere.  You may think that because the Los Angeles MTA has converted its fleet to Compressed Natural Gas (CNG) that we’re doing all we can.

Wrong.  CNG busses produce significant amounts of CO2, in addition to other pollutants.  But we could really make a dent in greenhouse gas emissions by converting the fleet to electric, and the MTA is already studying that possibility.

Not that this will be easy.  The MTA has already tested a few electric busses, and the results were less than stellar.  Electric bus technology is still fairly new, so cost and reliability are both factors.  On top of that, switching the fleet to all electric would require a massive investment in new infrastructure, and that will take years to implement.

So what can you do?  Get involved.  Stay informed about the MTA’s progress on going electric, and don’t be afraid to let them know if you think the process could be moving faster.

Follow the link below to read articles about this issue on the MTA’s blog, The Source.