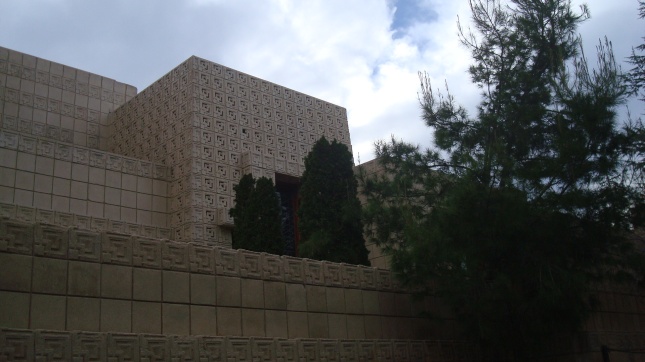 I’d read about Frank Lloyd Wright’s Ennis House for years, but I’d never actually been to see it.  So this last weekend I decided I was going to pay a visit.

The gate at the driveway.

It’s an amazing structure, built using the “textile block” process that Wright explored during his time in the LA area.  Unfortunately, as beautiful as the house is, it started falling apart even before it was finished.  Wright’s idea of mixing granite from the site into the concrete used for the blocks probably sounded like a good idea at the time.  In practice, though, it made the blocks unstable.  Millions have been spent restoring the Ennis House over the years.  For a while, it was owned by a foundation that tried to rehabilitate it, but the process proved too costly and they ended up putting the house on the market.

The front of the house.

Selling Wright’s LA area houses isn’t as easy as it might seem.  The Ennis House was on the market for years, and the price had to be lowered significantly before a buyer was found.  As far as I can tell, La Miniatura in Pasadena is still on the market.  The problem seems to be that beyond the purchase price, buyers know that they’ll have to spend a fortune on upkeep.  And because the houses are on the National Register of Historic Places, the standards for restoration are very strict.  If you need to patch a wall, you can’t just slap on some spackle. 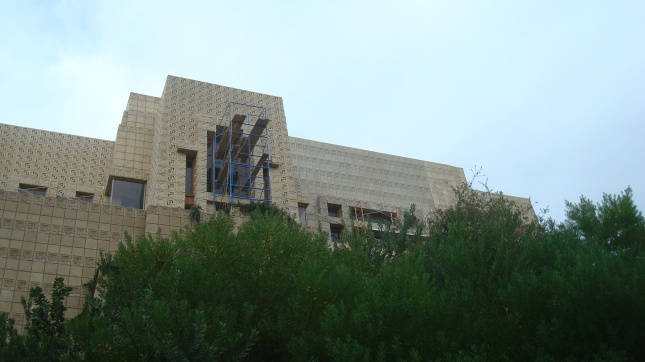 The back of the house.

But the Ennis House is lovely, and absolutely one of a kind.  Wright was influenced by Mayan architecture, and the house seems at once both ancient and modern.  To see what it looks like inside, visit the web site by clicking the link below.

And if you’re not familiar with Wright’s work, you might want to visit the Wikipedia page devoted to him.  Aside from the quality of the work he did himself, he had a huge influence on American architecture.

Wright thought he was creating a practical approach to constructing homes with his textile block system.  In reality, it turned out to be terribly inefficient and outrageously expensive.  But the fact that people have been willing to invest the time and money to maintain them over several decades is an indication of how precious these homes are.  Their value goes way beyond anything you can measure in dollars. 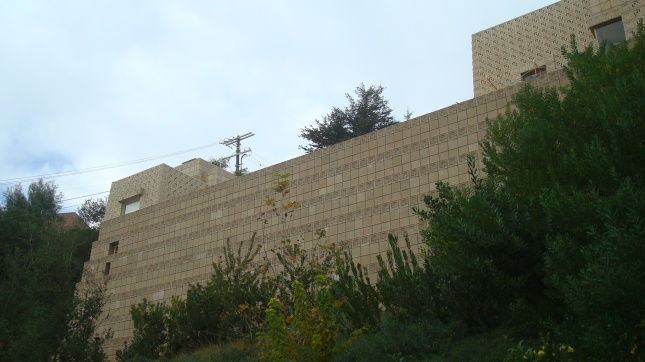 Another shot of the back of the house.

Demonstrators on the steps at Pershing Square.

There were a number of actions planned for this weekend to coincide with Martin Luther King’s birthday. I had heard that Black Lives Matter was holding a vigil downtown, and so I hopped on the Red Line and got off at Civic Center. But it turned out the vigil was over, and so I was standing there on First Street wondering what to do next.  Fortunately, I ended up running into a group of people who were demonstrating to protect the rights of the homeless. They were marching through downtown on their way to Pershing Square. I met up with them when they made a stop on Fifth Street.

The group stops to hear a speaker on Fifth Street.

The reason that homeless people end up sleeping in parks is they have nowhere else to go. The Mayor and the City Council are bending over backwards to help developers build luxury residential towers, while affordable housing gets harder and harder to find. Affordable units are being demolished or converted to condos so that property owners can make an even bigger profit. This will only increase the number of people living on the streets.

So you’ve been kicked out of your apartment because the landlord hit you with a huge rent increase. You can’t sleep on the sidewalk. You can’t sleep on bus benches. And you can’t sleep in the parks. Where do you go? Our elected officials don’t seem to care. They’re too busy granting variances for the developers who’ve been giving them campaign cash.

The affordable housing crisis in LA is getting worse. We need to address it. Instead of racing to build high-end residential skyscrapers, we need to be creating housing for all the people of Los Angeles. Everybody deserves a safe place to sleep. 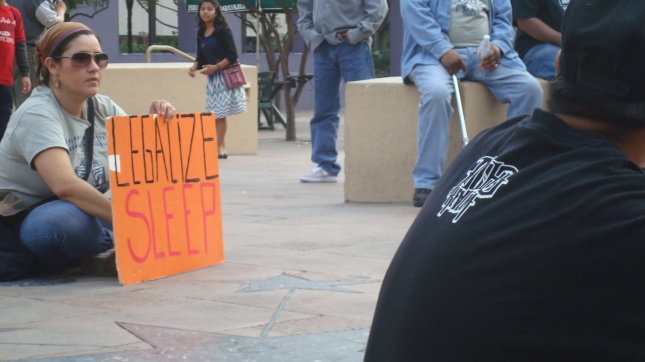 My favorite slogan from the demonstration. 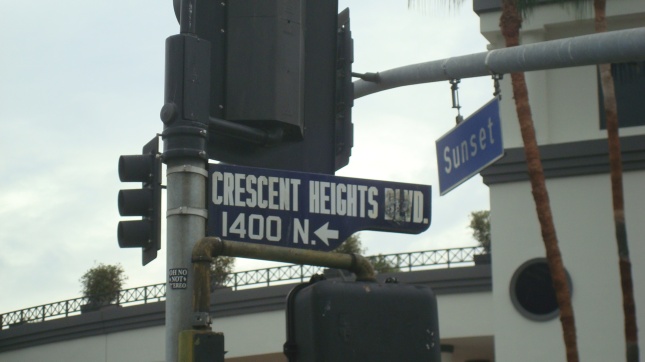 Last year I was elected to a seat on the Hollywood Hills West Neighborhood Council. It’s been interesting. On the one hand, I’ve made some good friends, and I have to say I’m impressed by the intelligence and dedication of the council members. On the other hand, it seems like the meetings never stop and the job requires sifting through endless amounts of information. It can be totally exhausting. But it’s gotta be done, because there are important issues that need to be addressed, and we can’t rely on city officials or developers to do the job properly.

Take the 8150 Sunset Blvd. project. The HHWNC held a public meeting a few days ago to give stakeholders a chance to ask questions of the developer reps regarding the Draft Environmental Impact Report. To prepare for the meeting, I had to read as much as I could of the DIER, which runs about a thousand pages. It was a mind-numbing experience, but I’m glad I took the time. There were a number of areas where I felt the information contained in the document was inadequate, but the most troubling omission was in the area of fire safety.

The LA Fire Department assessment states clearly that the 4 hydrants on-site have to provide a flow of 9,000 gallons per minute (gpm) for any of the high-rise alternatives. But the water main currently serving the site can only provide 3,750 gpm. Obviously, the water infrastructure has to be upgraded. So I went looking for specifics about how this was going to be done. The developer apparently has assumed responsibility for completing upgrades that will meet the needs for the project’s daily water usage, but they’ll need to do a whole lot more to satisfy the LAFD code requirements for a high-rise structure.

For projects like this, the DWP has to complete a Service Advisory Request, basically assessing the developer’s needs and stating what needs to be done to satisfy the City’s requirements. The DEIR references SAR Number 38449, approved in July 2013, in a footnote, and says it’s contained in Appendix G. But it’s not in the appendix.

So I thought I should contact the DWP to see if I could get hold of the SAR. On Monday I sent an e-mail to a DWP liaison explaining that the document was referenced in the DEIR, and asking if I could get a copy. The liaison wrote a nice e-mail back saying that he’d be happy to set up a meeting between DWP staff and the HHWNC in order to talk about the community’s water needs. I wrote back saying that I’d love to set up such a meeting, but I’d really like to get a copy of the SAR. That was on Thursday morning. I still haven’t gotten a response.

In the meantime, the HHWNC had it’s meeting where we got to ask developer reps questions about the DEIR. When my turn came, I mentioned that the LAFD code required a 9,000 gpm fire-flow for this kind of high-rise, and asked if there was a specific plan to satisfy this requirement. I also asked about the missing SAR. I may not be quoting them exactly, but basically their answer was, “We invite you to submit your comment on the DEIR.”

Call me paranoid, but I’m getting kind of concerned. We’re not talking about a minor disagreement on landscaping or a few extra cars on the road. This is a basic public safety issue. The LAFD requirements are clearly stated in the DEIR. Any of the high-rise alternatives for this project need a 9,000 gpm fire-flow. If there’s a plan in place to achieve this, that’s great. I’d love to see it. I’d also like to see the SAR that the DWP prepared back in 2013.

Compounding my concern are recollections of the water main rupture that flooded Sunset last year. I’m sure you all remember it, too, because it got plenty of media attention. In October, Wehoville ran an article on the flooding, and they quoted an e-mail from Steven Cole, of the DWP’s Water Distribution Division, to the West Hollywood Heights Neighborhood Association. In his e-mail, Cole said that the DWP was looking at replacing a 4 mile portion of a pipeline running along Sunset. He also said they were still analyzing the best way to accomplish that task. It makes me wonder if the DWP can guarantee that the water infrastructure needed to satisfy the LAFD requirements will be in place before 2018, when 8150 Sunset is supposed to be completed. Here’s the link to the article on Wehoville, in case you want to take a look at it.

Does anybody else see cause for concern here? I’d feel a whole lot better if if could see the DWP’s SAR. I’ve asked them for it twice. I’m still waiting.

I came across this article on Curbed LA, and thought it was pretty interesting. Three people who recently moved from San Francisco to LA explain their reasons for making the change. All three cite skyrocketing rents in the Bay Area. The thing that struck me was that the trends they describe in the San Francisco housing market are happening here, too. Real estate firms are buying existing buildings and jacking up rates. Developers are working furiously to create new high-end buildings. And if you can’t afford to pay the exorbitant prices, tough luck.

Our elected officials aren’t helping the situation. While they’ve made some small moves to create affordable housing, their efforts are shamefully inadequate. Of course, what motivation do they have to protect renters when they’re getting tons of campaign cash from developers who’ve put big money in high-end housing?

Anyway, here’s the article. If things keep going this way, these same people will be forced to move out of LA in a few years.

San Franciscans Explain Why They Moved to LA

Don’t worry. Garcetti has a plan for those of us who can’t afford the skyrocketing rents. See the picture below for a preview.