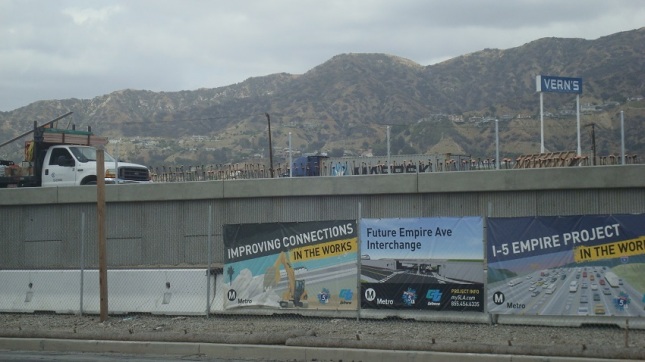 For years now construction crews have been tearing up Downtown Burbank. Caltrans is the lead agency on a huge infrastructure project which is remaking the I-5/Golden State Freeway corridor, as well as bringing changes to a number of Burbank’s surface streets. The actual name for all this activity is the Empire Interchange/Interstate 5 Improvement Project. Here’s a brief overview from the City of Burbank’s web site.

“This project, lead [sic] by Caltrans and funded primarily by State transportation funds and Los Angeles County transportation sales tax funds, will relieve congestion along Interstate 5 while providing an important new access to the Golden State area of Burbank, including the Empire Center and Bob Hope Airport.”

The I-5/Golden State Freeway as it passes through Burbank

Traffic on Burbank Blvd. where it crosses over the freeway

Here’s a short list of specific changes that are part of the project.

You’ll notice one of the main goals is to improve access to the Empire Center. If you’ve never been there, it’s basically a massive mall that has all the same chain retail stores and restaurants you can find almost anywhere else in Southern California. But more on that later.

Excavation next to the Empire Center

The project is way behind schedule. Various factors have pushed completion back substantially, including a dispute with a contractor and this year’s heavy rains. Demolition and replacement of the Burbank Blvd. bridge had been scheduled to start this year, but now Caltrans says they’ll start in 2020. It isn’t unusual for a project this big and this complex to take longer than expected, but Caltrans’ original 2018 deadline was ridiculously ambitious. Work has already been going on for over five years, and will continue for at least a couple more years.

A barrier under construction at San Fernando and Winona 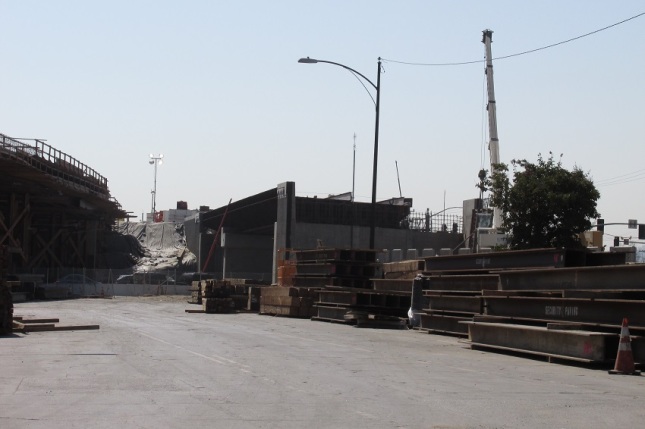 Work on Winona where it passes under the freeway

In the project overview above, you may have noticed that it said funding comes in part from an LA County transportation sales tax. This would be Measure R, which was approved by voters about a decade ago. Measure R money funds a lot of different things, but the major categories are: 35% to new rail and bus rapid transit projects; 20% to carpool lanes, highways and other highway related improvements; 20% to bus operations; and 15% for local city sponsored improvements. 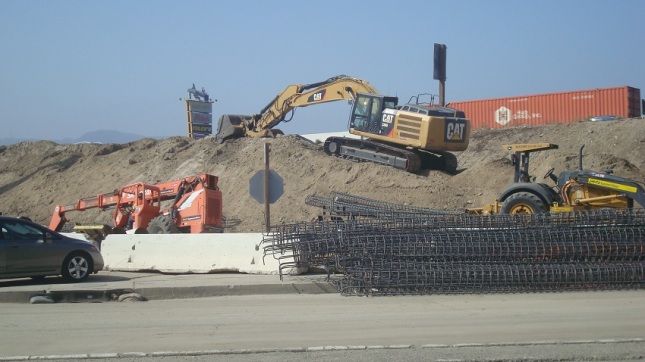 Construction on San Fernando next to the freeway

LA voters have consistently approved new taxes for transit and road upgrades, but there’s an ongoing debate about the way these measures are structured, with many transit advocates saying it’s counterproductive to levy new taxes to fund both transit and highway improvements. Their argument is that if we continue to invest in infrastructure that makes it easier to drive cars, then people will just continue to drive cars, even though billions are being invested in new rail infrastructure. On the other hand, the people who write these measures say that voters won’t approve them if there’s no money for roadwork.

There does seem to be a conflict here, which may, in part, explain the dismal performance of LA’s investments in transit. The Los Angeles County Metropolitan Transportation Authority (or Metro) has spent billions on new rail infrastructure over the past two decades, and yet transit ridership is lower than it was in the 80s. Some commentators believe that LA voters like the idea of transit, but ultimately end up sticking with their cars.

You can take the bus to the Empire Center, but as you can see by the photos below, most folks drive. 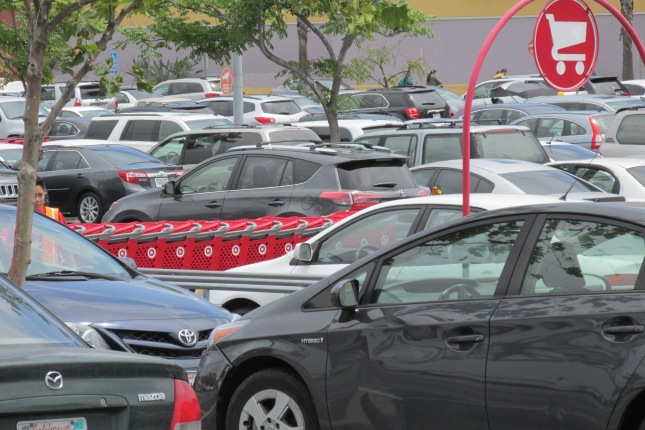 Parking lot at the Empire Center 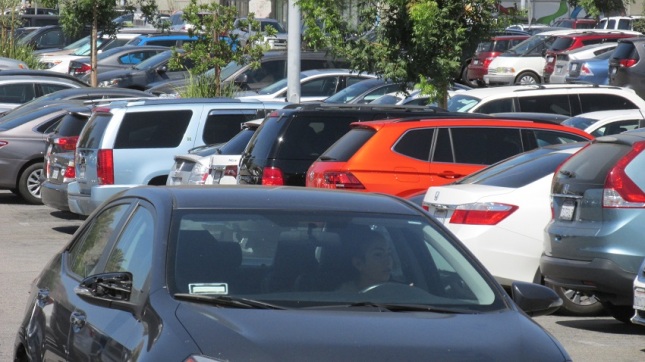 Another shot of the parking lot at the Empire Center

Burbank is a really car-centric town. Aside from the Empire Center, the Downtown area also has the Burbank Town Center and an adjacent outdoor mall. On weekends the parking areas/structures for all three of these malls are packed with cars. Burbank residents love to participate in the great American pastime of driving somewhere and buying stuff.

A family heading back to the car

Shoppers in the parking lot at Empire Center

And let’s not forget the other great American pastime of sitting in a line of cars waiting for food. 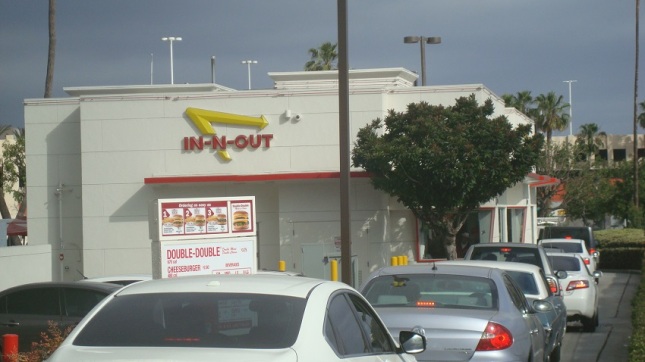 Line of cars waiting for their turn at the window

The line of cars looping back through the parking lot

The line of cars extends back around the building

Let’s face it. This is what powers our economy. Which I’m sure is why two of the primary goals of this project involve making it easier for people to drive to the Empire Center. Cars don’t just make it easier for Americans to buy stuff. Cars themselves are products that Americans love to buy. For decades one of the main drivers of the US economy has been the auto industry. After WWII, car manufacturing helped make the US the world’s major economic power. The jobs generated by the industry helped to create the American middle class, and the fact that they were union jobs meant fat paychecks that pumped dollars into the consumer economy. When the big auto makers were on the ropes a decade ago, Washington stepped in to rescue them, and the rebound in car sales was one of the things that lifted the US out of the recession.

Freeway onramp to be permanently closed

But it does seem like we have a problem. One the one hand, we have government officials telling us we need to get away from cars and rely more on transit if we want to fight climate change. On the other hand, we have government officials, sometimes the same ones, promoting efforts like the Empire Interchange/Interstate 5 Improvement Project. We’re spending tons of money on transit, and at the same time we’re spending tons of money to make it easier for people to drive to the mall.

Does this make sense to you? 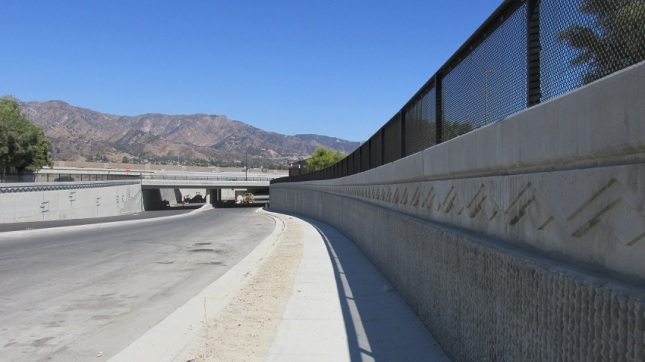 Here are some links to basic info about the project.

The Empire Project: A Virtual Tour

And here’s a story from the Burbank Leader that covers some of the reasons for delay.