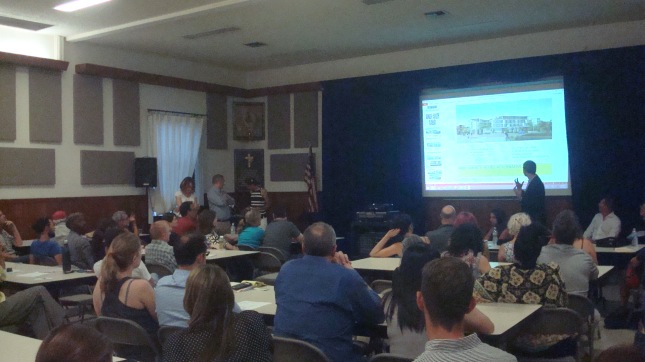 On Wednesday night the Silver Lake Neighborhood Council (SLNC) hosted a town hall meeting where the topic was the proposed Junction Gateway project. For those of you who haven’t been following this story, developer Frost Chaddock wants to build three structures on three sites along Sunset Blvd. in Silverlake. Two of the buildings are mixed-use, including residential, restaurant and retail space. The third is a boutique hotel. Predictably, the developer is asking for a number of entitlements, among them increases height and Floor Area Ratio (FAR). And predictably, a lot of the locals are ticked off.

By my count, the town hall drew about fifty area residents. The developer was there, along with the project architect, and a very smooth land use attorney from a high-powered law firm. They kicked the meeting off with a presentation on the project, emphasizing the ways they felt it would be beneficial to the community. Then two board members from the SLNC took turns reading questions that had been submitted by audience members. I want to say in passing that the SLNC board members handled the whole thing very well. The tension in the air was palpable, but they did an excellent job of minimizing disruption and keeping things on track. 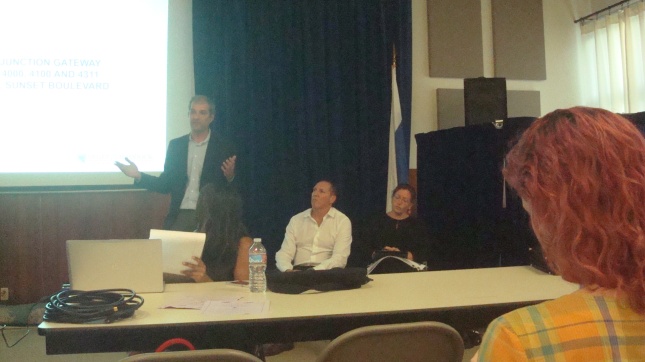 A land use attorney explains why his client’s project will be a boon to the community.

I have to admit I left early since I was taking the bus to Burbank and didn’t want to get started too late. But as I listened to the questions being read, it all sounded very familiar. While the developer claimed that Junction Gateway was absolutely right for the neighborhood, the tone of the questions made it clear that there was intense opposition in the community. The land use lawyer kept saying they had met with residents and made changes based on their input. But the changes mentioned were mostly cosmetic, and it was clear that the developer intended to build the project regardless of neighborhood oppostion. For me, the funniest moment was when the developer’s land used attorney insisted that in talking to the community, “We heard over and over again that Silverlake is lacking in boutique hotels.” That was a surprise to me. I know people who live in Silverlake, and I’ve never heard any of them complain about a shortage of boutique hotels. 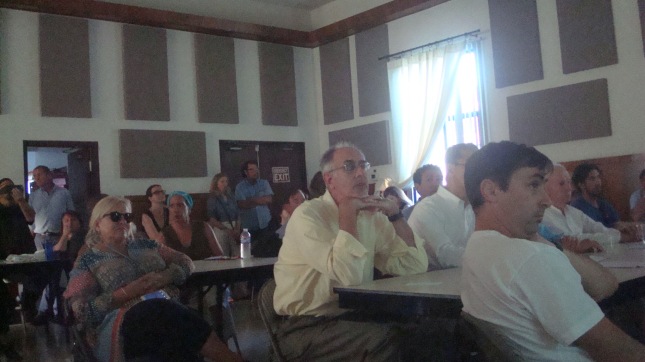 The audience is skeptical.

First, why are developers continually encouraged to build projects that violate the existing community plan for Silverlake and Echo Park?  According to the Department of City Planning web site, “the 35 Community Plans provide the specific, neighborhood-level detail, relevant policies, and implementation strategies necessary to achieve the General Plan objectives.”  When our City Council reps routinely allow developers to build beyond what the existing framework allows, they make planning meaningless.  Why do we have community plans if our elected officials are happy to toss them out for any developer with deep pockets?

Second, what about doing a meaningful assessment of all projects currently being considered for the area?  The developer’s team pointed out that Junction Gateway has been in process for years, and they argue that their assessment of cumulative impacts included everything that was happening when they started out.  Even if we accept this argument, there are a number of other projects that are coming through the pipeline and there hasn’t been any serious attempt to gauge their impacts on the community.  Infrastructure is already strained, air quality is deteriorating, and the streets are more congested than ever.  And yet O’Farrell keeps pushing new projects forward as though none of these problems existed.

The City of LA’s refusal to respect the planning process shows that our elected officials are far more interested in serving developers than in serving the citizens. Instead of creating a rational planning framework that starts with a genuine effort to engage the community, we get an avalanche of projects being dumped haphazardly on neighborhoods all over LA.

It’s no wonder the people at the meeting were ticked off. Affordable housing in Silverlake is fast becoming a distant memory, small-lot subdivisions are a plague sweeping the community, traffic keeps getting worse, the number of homeless is increasing. And still Mitch O’Farrell continues to back one project after another, blithely insisting that this onslaught of reckless overdevelopment will lead to a better and brighter future for his constituents.

Not surprisingly, a lot of people aren’t buying it. A number of those who attended the meeting belong to a group called Save Sunset Junction. If you’d like to connect with them, here’s the link. 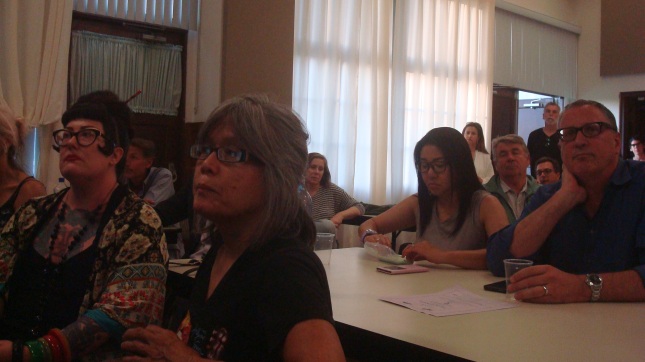 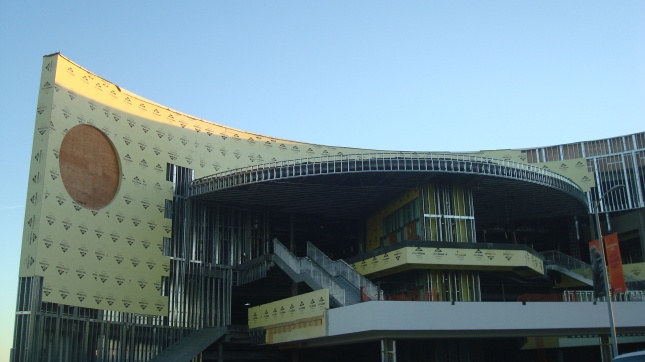 If you haven’t already heard, the Department of City Planning is holding a hearing this coming Friday on a proposal to restart the half-completed Target on Sunset. The project was stopped by a judge because it violated the Station Neighborhood Area Plan (SNAP). The City wants to create a sub-area within the SNAP which would allow Target to finish the building as is.

For those of you who haven’t been following this long, nasty struggle, the project that Target originally proposed for the corner of Sunset and Western was in compliance with the SNAP, and it seemed like pretty much everybody was on board with the idea. Then, at the behest of city officials, Target significantly increased the height of the project, making it more than double what the plan allowed. The revised design would have also required a number of other variances. At that point, community members who had supported the original project came out against the new, larger version. They filed a law suit, and Target, inexplicably, forged ahead with construction. When the judge sided with the plaintiffs, construction screeched to a halt. And this hulking, half-finished curiosity has been sitting at the corner of Sunset and Western ever since. 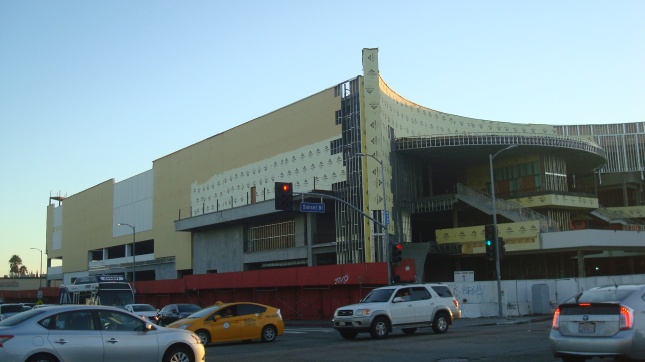 Why is this happening? Local residents worked with the City for years to formulate the Station Neighborhood Area Plan. The whole idea was to create a framework for development that would stimulate growth without trashing the community. Why did members of the community invest years of time and effort into writing the SNAP if a city official can sweep it aside with a wave of their hand? (Many point the finger at then-Councilmember Eric Garcetti, who’s been pushing for taller buildings all over LA.)

Target gambled when they started construction on a project that was facing a legal challenge. They lost. Why should we bail them out? They should go back to the drawing board and create a project that complies with the law. And if they don’t want to do that, they should forget the whole thing and just sell the site.

But instead of making Target deal with the consequences of their actions, the City of LA is running to the rescue by creating a new sub-area within the SNAP. This is so depressing. But certainly not surprising. When you look at the amount of money that developers have given to the Mayor and City Council, it’s easy to see who’s really running things.

My feeling is that this is probably a done deal. The Department of City Planning is putting on a show this Friday to make it look like the public has had a chance to be heard. After the hearing is over, my bet is that they’ll approve the sub-area, and Target will go ahead and finish their building.

But don’t let my pessimistic, defeatist attitude infect you. In spite of my misgivings, I still sent an e-mail to the hearing officer to let the DCP know I was completely opposed to this stunt. I urge you to write as well, or better yet, show up at the meeting and let them know how you feel. We may not win, but we can go down fighting.

Here’s the info for the meeting.

You can send an e-mail to the hearing officer at the address below. Be sure to include the case number in your subject line.

And here’s the link to the meeting notice. 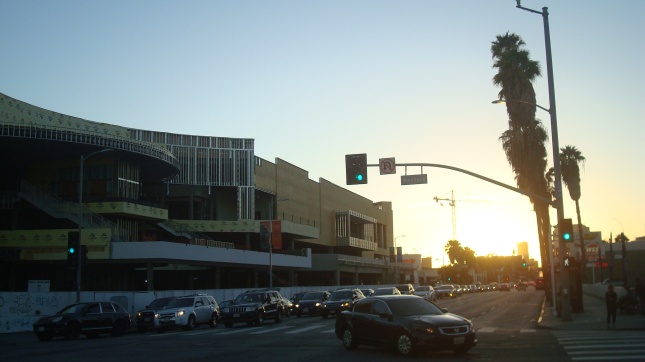 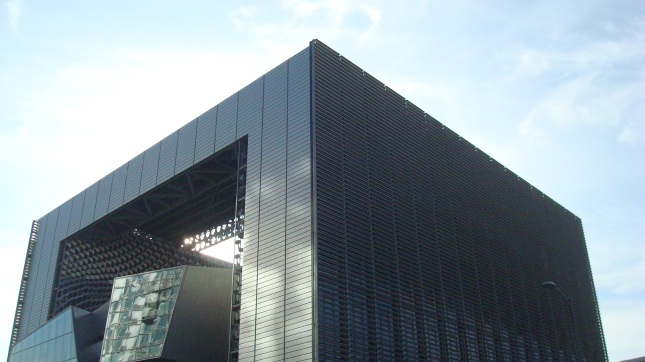 Sunset Boulevard is changing rapidly. Developers sense there’s big money to be made, and the City Council is rushing to approve their wish lists with as much speed and as little oversight as possible. Let’s take a look at three projects that are in various stages of completion…. 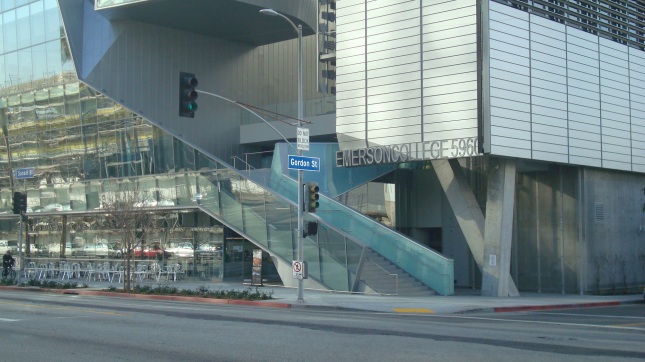 A view of the Emerson campus at street level.

The most interesting of these projects, and in my view the one most likely to produce real benefits for the community, is Emerson College. The school’s new LA campus was designed by Morphosis, and while I’m not a huge fan of the firm’s approach, I have to say this is a nice piece of work. By far the most striking building on the streetscape, it certainly calls attention to itself, but without being ostentatious or garish. It’s a sophisticated modern structure that also manages to be playful. It’s been a while since anyone built anything this cool in the Hollywood area. 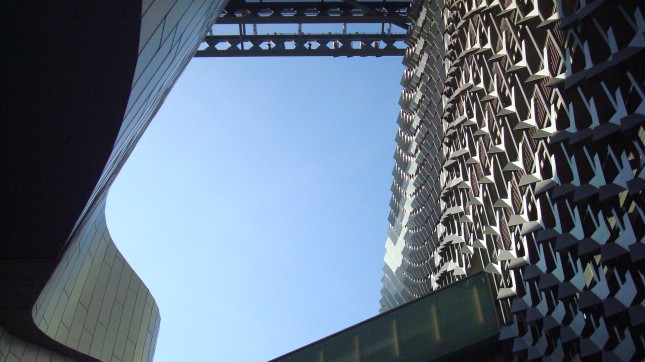 A view from a terrace at the entrance to the campus.

Also, Emerson will be bringing teaching and administrative jobs to the community. The City Council insists that development is necessary to reduce unemployment, which sounds logical, but most of the projects they approve will only create low-paying service sector jobs. They seem to feel Hollywood residents should be satisfied with waiting tables and vacuuming hotel rooms. Anyway, Emerson just opened in January and is located at the corner of Sunset and Gordon. 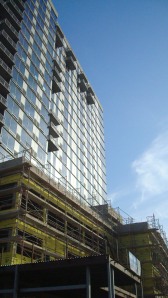 A new residential/retail complex across from the Emerson campus.

Right across the street is yet another mixed-use, residential/retail tower. This seems to be the kind of project that developers can’t get enough of right now, high-end housing combined with ground floor retail. By combining the two they can claim they’re addressing the traffic problem by making it easier for people to shop where they live. In reality, I don’t see any evidence that this approach is reducing congestion in the LA area. But there are plenty more projects like this in the works. At least this one looks kind of nice.

The biggest thing going up on Sunset right now is Columbia Square, which will be a massive mixed-use project that incorporates the old CBS Studios. You probably won’t be surprised that it promises still more high-end housing with still more ground floor retail. They’re also billing it as “Hollywood’s New Creative Media Campus”. I’m not sure exactly what that means, but hopefully the finished product will deliver more than I expect. You can click here for more details. At least they’re preserving the CBS building, so I guess I should be thankful for that. To read more about the history of CBS Studios, click here. 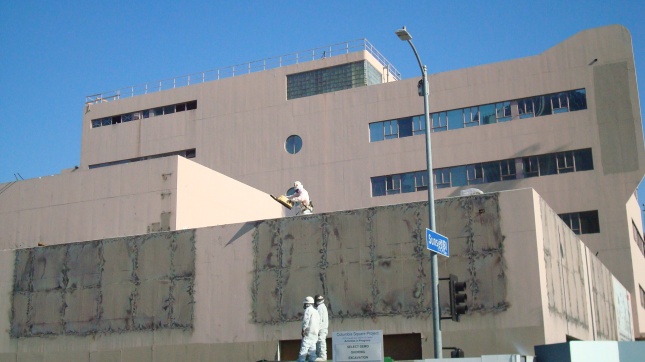 Workers atop the old CBS Studios.

Columbia Square will occupy a full city block. Right now workers are busy inside a massive excavation as they prepare the foundation. There’s something about the scale of these enormous projects that’s kind of overwhelming. I look down into this huge pit and see hundreds of workers, I see trucks, tractors and cranes. A whole city block is being transformed. 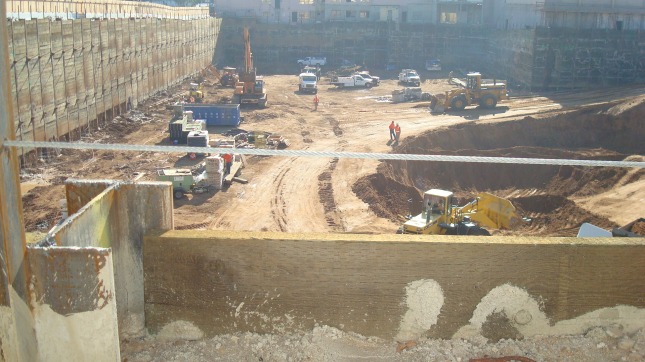 Workers preparing the foundation for the Columbia Square project. 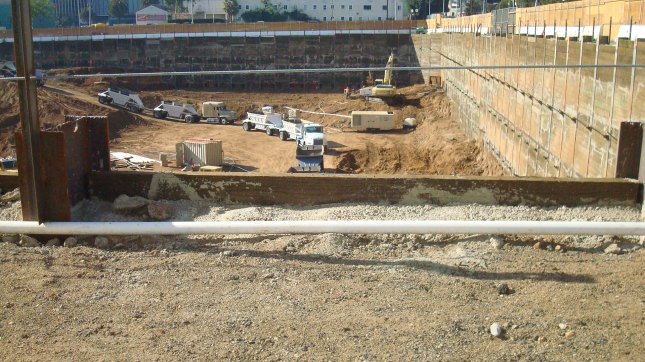 Another shot of workers preparing the foundation.

Here are a few more images…. 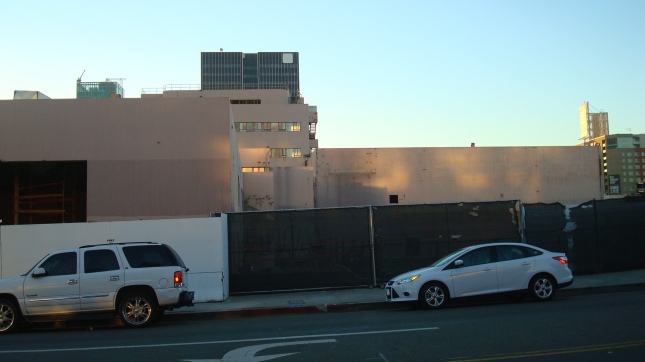 A side view of the site, facing west. 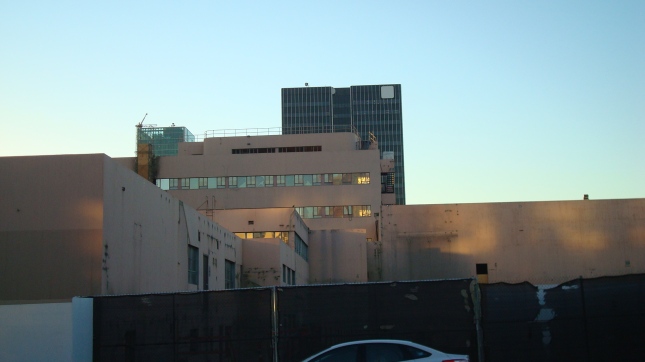 Another side view, again facing west. 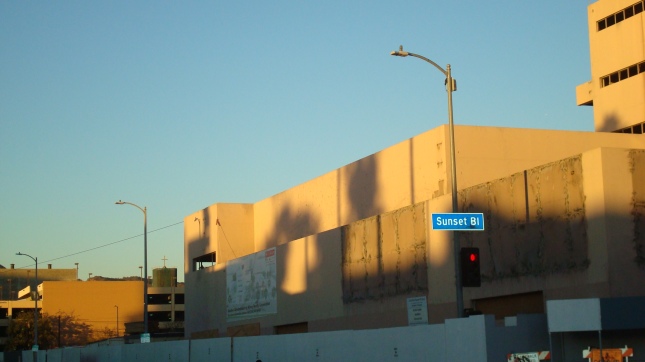 A shot of CBS Studios taken in the late afternoon.

You may wonder why I included these, since they’re mostly shots of the sky above the project. It probably seems like just a lot of empty space. But that’s what I wanted to capture. When Columbia Square is finished, it will rise twenty stories above street level.

All this space will be gone.