I ride public transit almost every day. I really believe we need to invest in building a better transit system. And I used to think we were doing that, but not any more.

Measure M, the LA County Traffic Improvement Plan, is an ambitious attempt to do a lot of things. By adding another half cent to our sales tax, the County hopes to fund a variety of projects, with a good part of the money going toward enlarging the Metropolitan Transit Authority’s rail system. The MTA has already embarked on an ambitious program of building new rail lines and expanding others. You’d think that would be a good thing, but looking at the facts, I’m really not so sure.

For years now the MTA has been building rail all over LA County. First we got the Red Line and the Purple Line, then the Green, Blue and Gold Lines. The Expo Line was recently extended west, and the Crenshaw/LAX Line is currently under construction. You’d think that with this massive investment in rail, taking public transit would be so easy and fast that everyone would be jumping on board.

But that’s not what’s happening. In fact, transit ridership in LA County is lower than it was 30 years ago. When the LA Times reported this disturbing fact at the beginning of the year, the article sparked a lot of heated discussion. Some claimed that the Times was giving a distorted view. Others looked to the future, saying that stats would get better with time. But in the reading I did, there was one crucial fact that no one commented on. The County’s population has grown by over a million since 1990. To my mind, when you take that into account, there’s only one conclusion you can reach. Our current approach has been a disaster. If the population has grown by more than 10% over the past 30 years, how can we say that a decline in ridership during the same period represents anything but failure. 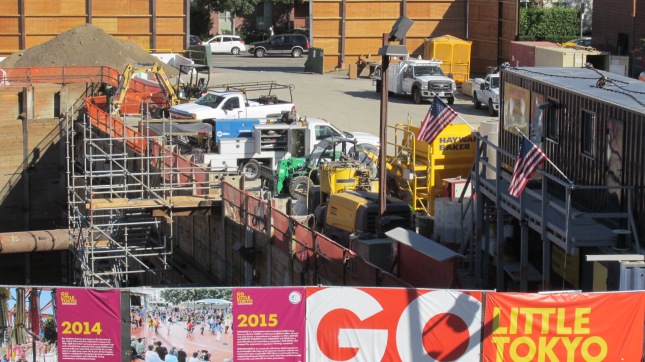 Another shot of construction on the Regional Connector.

There are a lot of different theories floating around as to why ridership hasn’t grown along with the system, and I’m sure there are a number of factors in play. But I think one of the most important factors is the City of LA’s insane approach to planning. I read a lot of the stuff that comes out of City Hall, and over and over I hear the refrain that transit and land use must be considered together. Sounds logical, doesn’t it? It would make sense to think about where you’re putting housing at the same time as you think about where the next rail line goes. In theory, people could just step out of their apartment, walk down to the platform and catch a train wherever they’re going. Who needs a car?

The problem is, when the housing starts at $2,000 a month, and often goes much higher, you’re really not building housing for the people who use public transit. For the most part the people who depend on the MTA can’t afford that kind of rent. And the people who can pay that much are more likely to own cars. What’s even worse, as the rail network has expanded, City Hall’s policies have actively encouraged gentrification around new rail stops. It used to be pretty much anybody could afford to live in Hollywood. Not any more. As the Department of City Planning approves an endless parade of high-end housing projects and chic hotels, as they continue to hand out liquor permits to trendy restaurants and clubs, rents keep spiralling higher and the demographic most likely to use transit is being squeezed out. A similar scenario has already played out in North Hollywood, Downtown, and Highland Park, and you can look for more of the same in Leimert Park and Boyle Heights in a few years. So while City Hall claims to be thinking about transportation and land use together, in reality their policies are driving transit riders farther away from transit hubs.

Another problem I have with Measure M is the fact a large portion of the funding goes toward road and freeway improvements, and this is something many people have commented on. There are those transit critics who complain that the MTA is heavily subsidized by our tax dollars, but they never seem to mention that a huge share of our tax dollars also goes to subsidizing travel by car. If we’re trying to reduce our use of fossil fuels and cut down on greenhouse gas emissions, then our focus should be on investing in public transit. But Measure M continues our current policy of investing in both at the same time. How’s this working? Well, our recent experience with widening the San Diego Freeway tells the story. After years of work and millions of dollars, traffic is still awful. We do need to maintain roads and freeways, since busses travel on both, but massive investment in “upgrades” is just encouraging people to keep driving their cars.

I’d love to see us build a transit system that made travelling by rail and bus attractive to a majority of Angelenos. But that isn’t what’s been happenning. Instead, a bizarre tangle of policies has led to a decline in transit use even as the County has continued to grow. The City of LA seems dead set on continuing its drive to build upscale urban enclaves, forcing low-income Angelenos away from transit hubs. And for all the money Measure M would put into transit, it would also spend a lot of money on keeping people in their cars. 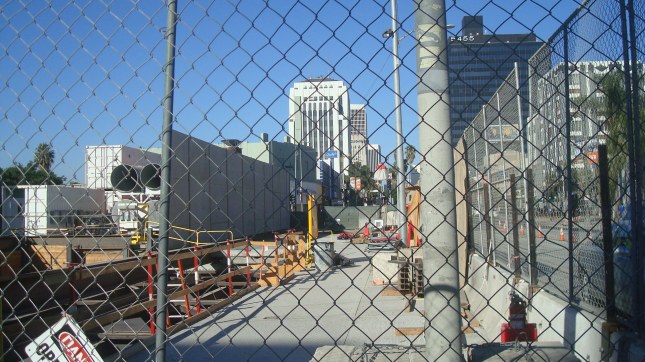 Another shot of construction at Wilshire and La Brea.