While I was keeping my Hollywood Journal, I tried to take photos to document some of the changes that were occurring. These were taken while the Hollywood & Highland Center was being constructed, and they sort of go along with the first entry I wrote (Hollywood Journal – Intro). Sorry the quality isn’t better. I’m not a great photographer, and these were taken with a disposable camera.

It’s important to remember that Hollywood & Highland was being built as the same time as the Red Line was under construction below Hollywood Boulevard. Because one of the subway stops is built into the complex, the two projects had to be done concurrently. It was a crazy time, because the construction of that stretch of the Red Line was a mess. Hollywood Boulevard sank six inches, in part because the contractor was was not following proper procedures during tunneling. It was reported that they were using telephone books instead of metal wedges to prop up the supports. 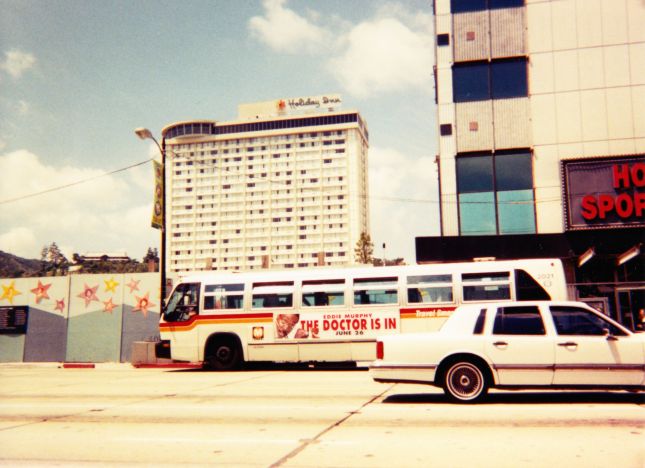 A different angle on the site.

Above are two views of the construction site from Hollywood Boulevard. In both you can see part of the office building that used to stand on the northwest corner of Hollywood and Highland. Also, in the background you can see the former Holiday Inn, which is now Loews Hollywood Hotel. Those familiar with the area will notice that in those days it didn’t have the facade which was added back when it was known as the Renaissance.

Looking down Orchid to the El Capitan.

This is a shot of the El Capitan from Orchid. This part of the street no longer exists, since it was closed off in order to construct Hollywood & Highland. You can still enter Orchid from the north on Franklin, but it no longer continues through to Hollywood Boulevard. 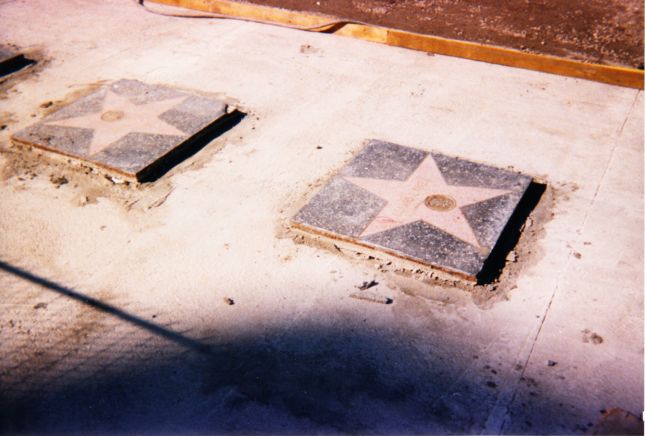 The Walk of Fame during construction.

The stars on the sidewalk in front of the project were removed during construction, and then replaced when the project was finished. 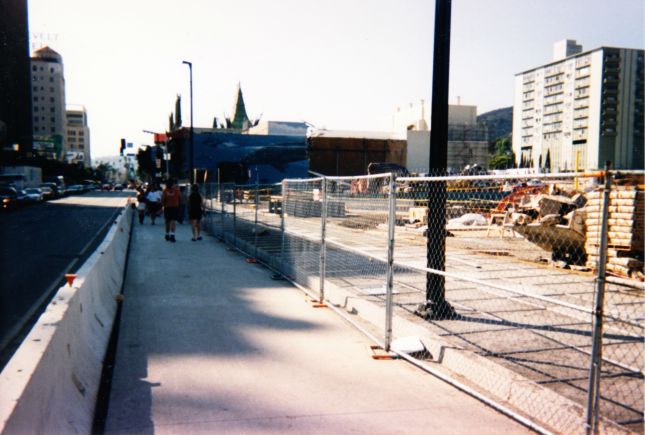 Above is a shot looking west. It’s too bad the image isn’t very sharp, but you can see the remnants of a cool mural depicting whales in the ocean. It was painted on the side of the Chinese Theatres. Also, in the distance, you can see the Roosevelt Hotel. 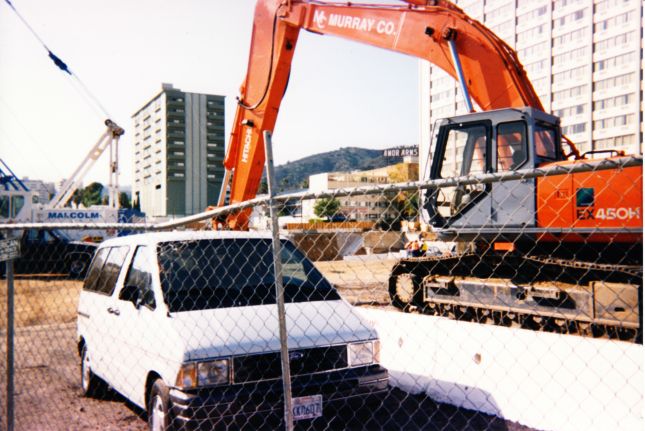 Another shot of the construction site facing west.

The First National Building stands alone against the sky.

In the first two photos above you can see the office building that used to stand on the northwest corner of Hollywood and Highland. It had to be demolished to make way for the new mall, and I remember how its disappearance created this amazing sense of space. Before the new structure rose up, you had a mostly unobstructed view of the hills. And for a while the First National Building, which still stands today, seemed to tower over everything.

Looking across the construction site towards the El Capitan.

Another view of the construction site, looking towards the El Capitan.

During the eighties movie exhibitors began building multiplexes instead of stand-alone theatres. In order to compete, the company that owned the Chinese built two more auditoriums right next door, the Chinese Two and Three. They didn’t look like much from the outside, but they both offered large screens and excellent sound. When Hollywood & Highland was built these two theatres were demolished, and were replaced with six more inside the mall.

As much as I enjoy ranting about greedy developers and sleazy politicians, I realize that this blog would be pretty boring if that’s all I ever wrote about. So I’m going to try to mix it up a little.

For over ten years I kept a journal about the Hollywood area. I’ll be posting excerpts here from time to time. Hopefully this will break the monotony of my ongoing diatribes against the powers that be.

A couple notes about the entry below. Those who have only known the Chinese Theatre in recent years may be puzzled by the mention of the two additional marquees. This was written at time when Mann Theatres had built two large auditoriums right next door, hoping to compete in the age of multi-plexes. These two theatres were torn down when Hollywood & Highland was constructed, and replaced by six inside the mall.

If you don’t live in the LA area, you’ll be wondering why I have a problem with Tutor-Saliba. Even back then they were notorious for cost overruns and long delays, but the city still awards them projects because they’re so well-connected. The names and faces may change, but the dynamics that shape the city stay the same.

Sunday. Early afternoon. I’m sitting in a restaurant right across from the Chinese. In God’s Hands is playing at the main theatre. I look to the right and see that Tarzan and the Lost City is playing next door, and at the far end of the building is the now-familiar sign advertising the Titanic.

Beyond that, across Orchid Ave. is a construction site surrounded by a wooden barrier. The side of this barrier that runs along Hollwyood Boulevard is decorated with pink and yellow stars that have the faces of famous actors painted in the center. The Orchid Ave. side is covered with dull beige paint. And there is a sign announcing that the project is being handled by Tutor-Saliba-Perini. Good God, not again.

Beyond the construction site is the office building that stands at the corner of Hollywood and Highland. Off in the distance I can see a tall apartment complex, a billboard and a little piece of the Hollywood Hills.

A few days later I’m in my apartment, just a few blocks from Hollywood Boulevard. It’s after nine PM. I can hear the traffic on the Hollwyood Freeway. It’s always there, kind of like the ocean.

I’m thinking about all the stuff that’s happening in Hollywood, all the changes they’re making. There’s that big project over by the Chinese. The Max Factor building is being restored. The Cinerama Dome is gonna be sucked up into a shopping mall. It seems like the little shops and restaurants along the boulevard are doing better than they were five years ago. And I think the MTA still claims they’re gonna have a subway stop here eventually. I’m not holding my breath.