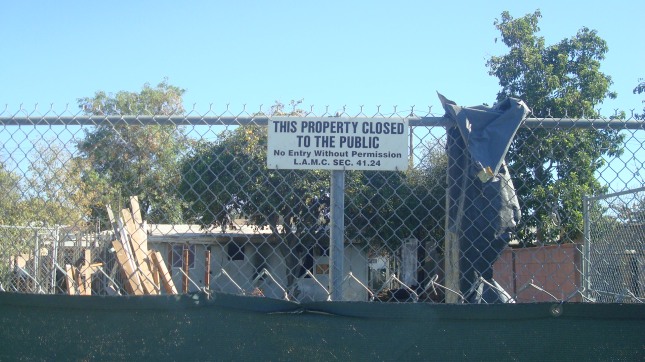 Notice outside of vacant homes on Roscoe Blvd. in Panorama City.

If you live in LA, by now you’ve gotten used to the fact that homeless people are part of the landscape. No matter where you go, Downtown, Koreatown, Hollywood, Van Nuys, you see people living on the streets. It used to be that homelessness was one of those things you could escape by running to the suburbs, but not any more. Nowadays Burbank, Glendale, Encino, all have their share of people living in tents and cardboard boxes. The homeless are everywhere, and there’s no simple solution.

The homeless population in Panorama City has been growing for a long time. For a while there was a large encampment off of Van Nuys Blvd. over by Smart & Final. Not too long ago the City dismantled it, but of course, that didn’t solve the problem. The residents of the camp were dispersed, but they didn’t go away. They just bundled up their stuff and moved it somewhere else. 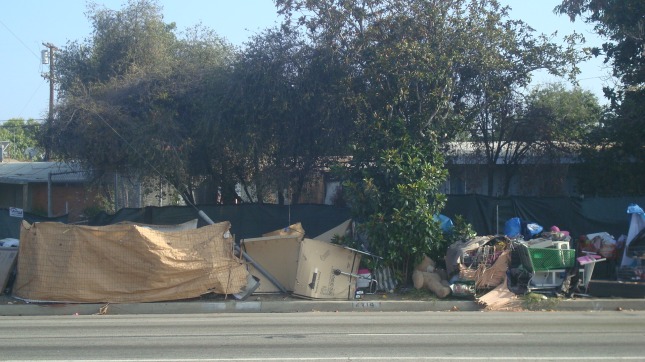 Homeless encampment near Roscoe and Lennox. 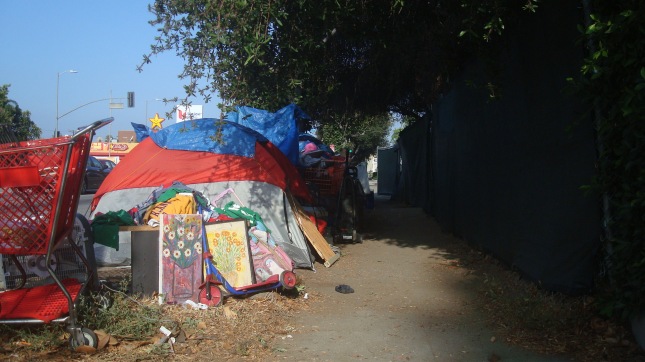 Another shot of the makeshift shelter.

At the corner of Roscoe and Lennox there was a row of houses that were empty. A developer had bought them intending to tear them down, but since work on the project hadn’t started yet, the homes just stood there, vacant. It wasn’t long before a group of homeless people decided to move in. The police chased them out, but instead of leaving the area, they simply created a makeshift shelter on the parkway in front of the houses. As weeks went by the shelter grew larger and longer, until it was difficult to pass on the sidewalk.

Vacant houses near Roscoe and Lennox.

A view from the alley behind the vacant homes.

I was curious to find out what was going on with the empty houses, so I contacted Councilmember Nury Martinez’ office. I got a call back from her Communications Director, Adam Bass, who told me that the developer had pulled a demolition permit for the houses, though he wasn’t sure when they’d actually be bulldozed. I asked how Councilmember Martinez was dealing with the homeless situation in her district, and he informed me that earlier this year a new program had been launched in CD 6. The Homeless Outreach and Proactive Engagement (HOPE) initiative brings together the LAPD, the Bureau of Sanitation, and the LA Homeless Services Authority to engage with those living on the streets. While the City still clears away illegal encampments, the idea is to offer assistance to those who want it. Bass told me that since May, the HOPE initiative had helped dozens of homeless people in the Valley, in some cases finding them space in shelters and in others giving a hand to those looking for jobs. Over the summer the program expanded into the LAPD’s Central and West bureaus, and next month it’ll move into South LA.

This is a big improvement over the City’s past efforts. Some of City Hall’s recent attempts to deal with the homeless have been outrageously heavy-handed. Their efforts were so draconian that they were challenged in court three times, and the City lost every time. So the idea of a multi-pronged approach that brings different agencies together to offer assistance is a welcome one, and I’m glad it’s been successful so far. But unfortunately, the problem is so big and so complex that it’s going to take a lot more to bring about real change.

There are no easy answers. I’ve talked to a lot of people about this issue, and everybody’s got ideas, but there’s no consensus. In November there will be a measure on the City ballot to approve a $1.2 billion bond which would pay for construction of permanent supportive housing. At the same time, the County is expected to ask voters to approve a quarter cent sales tax increase which would help provide new services to the homeless. These initiatives could make a big difference, but really they both have to pass in order to make things work. To construct new housing without expanding staff to provide support for the homeless would be a waste of money, and the same goes for offering additional support without getting people off the streets.

And it could be that both of these measures will go down. In this upcoming election, the City, County and State are asking voters to approve billions in taxes and bond measures, and it seems possible that many voters, overwhelmed by the flood of initiatives, won’t be in the mood to approve anything.

As for other ideas on how to help the homeless, some people have suggested that the City use existing vacant housing to provide shelter. My feeling is that without support services, this would be futile. The idea of gathering tens of thousands of homeless together in empty buildings without offering mental health services, help for addicts or counseling seems like a recipe for disaster. Another proposal is to get the state and/or federal government to kick in more money. Garcetti already tried that. It went nowhere.

Personally, I think the most important thing is to keep people from becoming homeless in the first place. This probably sounds so obvious you may ask why I’m even mentioning it, but it’s important to keep in mind. One of the leading causes of homelessness is eviction, and thousands of LA tenants have been kicked out of their homes in recent years. In part, this is because the City offers incentives to developers that make it very tempting for them to take advantage of the Ellis Act. If City Hall really wants to make a dent in the homeless problem, our elected officials need to stop rewarding landlords who throw their tenants out. The recent passage of an ordinance to crack down on “cash for keys” scams is a good start, but City Hall needs to do more. If you don’t want people living on the streets, then you need to do everything possible to keep them in their homes.

Demolition of the houses on Roscoe.

Earlier this month, the homeless encampment on Roscoe was dismantled. Around the same time, the houses that had been standing empty were demolished. But it’s only a matter of time before another makeshift shelter springs up in the neighborhood. This problem isn’t going away any time soon. 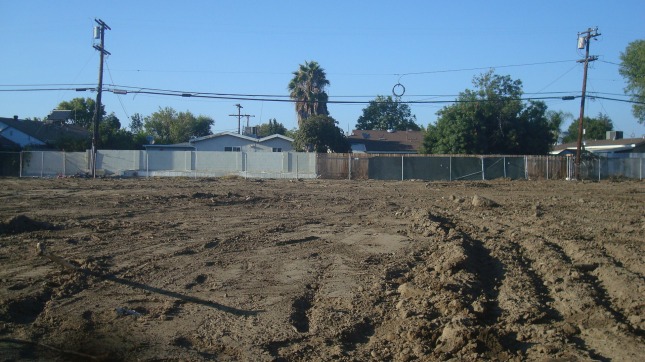