Members of Union de Vecinos and the LA Tenants Union at a gathering on Thursday.

It’s not uncommon these days to hear about a group of investors buying an apartment building and forcing the tenants out. Sadly, this kind of thing happens all too frequently in LA, and we’ve seen thousands of apartment dwellers lose their homes in recent years. Many renters don’t know their rights and leave without putting up a fight. Those that try to stay can get ground down by long and costly court battles.

But every once in a while the tenants win out.

Earlier this year the apartments at 4330 City Terrace were bought by Manhattan Manor, LLC. (Love the name. It’s so classy.) The new owners immediately imposed a steep rent increase on the tenants, certainly knowing that most couldn’t pay and would have to leave. Carolina Rodriguez’ rent went from $1,250 to $2,000, far beyond what she could afford. She could have thrown in the towel and left, hoping to find another place she could afford. But she decided to fight, and last month, she won.

With the help of the Los Angeles Center for Community Law and Action (LACCLA), Carolina went to court, and the jury sided with her. In fact, not only did the jury decide that $2,000 a month was unfair, they said that the apartment she occupied needed major repairs and was only worth $1,050 in its current state. Must’ve been a shock to Manhattan Manor. 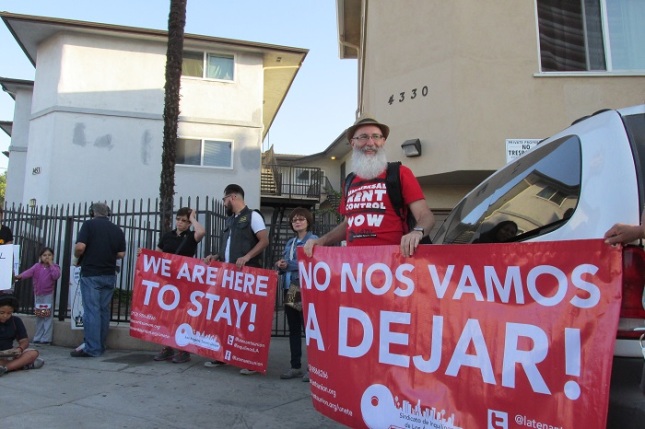 Celebration on City Terrace after the victory in court.

On Thursday a crowd of people gathered at 4330 City Terrace to celebrate this victory. In addition to residents from the building, members of Union de Vecinos (UV) and the Los Angeles Tenants Union (LATU) showed up to hear speakers talk about Carolina’s struggle, and to remind everyone that the struggle is still going on. Noah Grynberg, the lawyer from LACCLA who argued the case, gave an energetic speech about the importance of protecting people’s rights. Elizabeth Blaney, of UV, emphasized that there was still a long way to go in the battle against gentrification and displacement.

Noah Grynberg, of LACCLA, speaks to the crowd.

And Carolina took the mike to talk about how she came to the point where she felt she could stand up to the landlords. She mentioned another tenant who lived in the building, Jesus Baltazar, who had been a major influence. Though he was very ill, Jesus had insisted passionately that the tenants had to make a stand, that they shouldn’t be pushed around. His determination inspired her, and she decided to go to court. Sadly, he has passed away. His daughter, Georgina, is still fighting eviction.

Carolina Rodriguez tells how she decided to fight eviction.

The struggle goes on. Property owners will continue to kick people out of their homes in their pursuit of higher profits. But this story shows that tenants can fight back, and they can win.

If you’d like more info about the organizations mentioned above, the links are below. They all deserve your support. 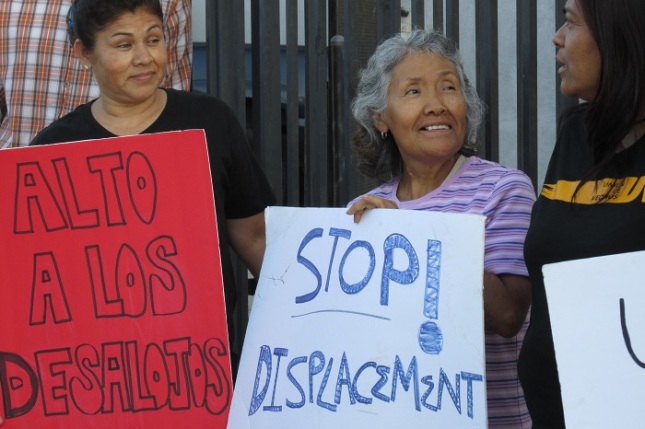