The Reseda Theater has been sitting vacant for over 25 years. Built it 1948, it was part of a small business district clustered around the intersection of Reseda Blvd. and Sherman Way. As the suburbs grew in the years after WWII, neighborhood theatres like this popped up all over the Valley, showing inexpensive double features and drawing crowds of kids on weekends with matinees.

Those days are long gone. The Reseda closed in 1988, and suffered damage in the 1994 Northridge quake. Community members spent years trying to make something happen at the site, and in 2008 it looked like their efforts might pay off. The Community Redevelopment Agency (CRA) announced a public-private partnership with developer CIM, and each of them purchased additional parcels near the theatre. The idea was that The Reseda would be reopened as a dinner theatre, hosting different kinds of entertainment. The additional parcels would be used to further revitalize the neighborhood.

A row of shops directly opposite the theater

But that never happened. In an article that appeared in CityWatch last week, former LA City Councilmember Dennis Zine laid the blame squarely on CIM. Zine claims that after raising the community’s hopes, the developer never followed through. Instead, CIM has been sitting on their parcels for years, with no intention of developing them. According to Zine, their plan is to sell the parcels to the City at a profit. 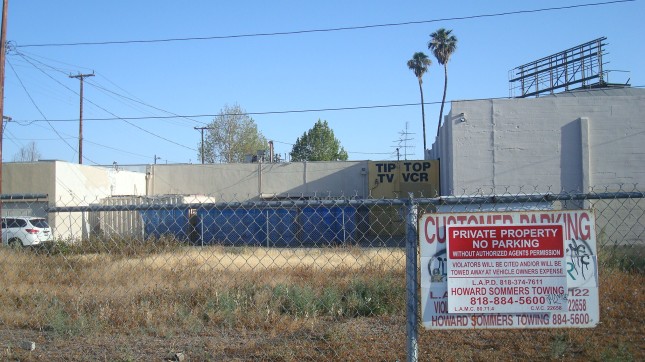 Vacant lot directly behind the theater

After reading Zine’s piece, I wanted to get more details, so I contacted Revitalize Reseda, a non-profit formed by community members who hope to inject some life into the area. The response I got from Walt Sweeney pretty much echoed what Zine had to say. “CIM was not a good business partner in Reseda,” he writes. “By stalling the project, CIM eventually ran into funding problems. The recession was the final nail in the coffin.” Sweeney says that CIM has received offers on their parcels that would have allowed them to sell out at a profit, but have decided instead to sit on the properties, to the detriment of the neighborhood. “Even though CIM has the expertise, money, and manpower, I would rather see anyone else develop this project. CIM has shown itself to not be a good community partner.”

Sounds pretty frustrated. And who can blame him? There’s substantial support in the community to bring this neighborhood back, but there’s no hope as long as the developer hangs on to these properties. If CIM doesn’t want to do anything with the parcels, they should sell them off. As it is, they’re just holding the community back.

The marquee of The Reseda Theater

If you want to read Dennis Zine’s piece in CityWatch, here’s the link.

Development in LA Is Out of Control

And if you want to connect with Revitalize Reseda, click on the link below.

Another view of the shops opposite the theater