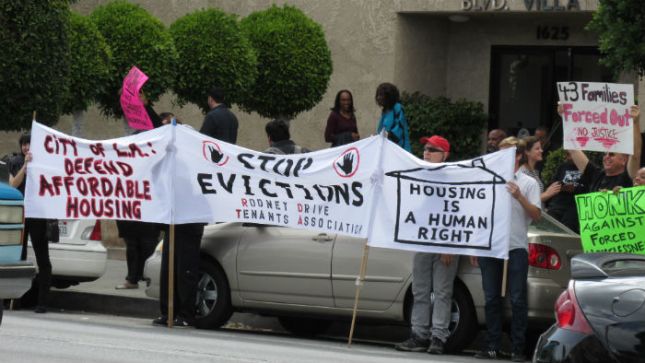 I was riding the bus along Crenshaw yesterday, when I saw a group of people gathered in front of a building holding banners and signs that read “Stop Evictions” and “Defend Affordable Housing”. I wanted to know what was going on, so I hopped off the bus at the next stop and walked back to check it out.

The protest was being held in front of the the apartment building at 1625 Crenshaw, and many of people involved were tenants there. Last December they’d been told they had 90 days to get out. Seems the owner has decided to kick everybody out in order to turn the building into high-end housing. Since it isn’t covered by the Ellis Act, the landlord is under no obligation to offer money for relocation.

I talked to Frances Bell, who’s been a tenant there for 22 years. Because she pays market rate for her apartment, she’s been given additional time to leave, but she hasn’t yet found a new place to live. Moving can be expensive, and covering the cost herself is a hardship. There’s a sad irony to Frances’ story, because she works for the Department of Mental Health. One of the things she does as part of her job is help people relocate when they’ve been forced out of their home. Little did she know she’d one day be in the same predicament as her clients at the DMH.

I was surprised to run into a friend of mine, Mark Simon, who was holding up one of the banners. Mark lives in Hollywood, and he had told me a while ago that his landlord was trying to evict all the tenants in his building. They’ve been fighting it in court, and have managed to delay the process, but they’ll have to leave in January of next year unless something changes. 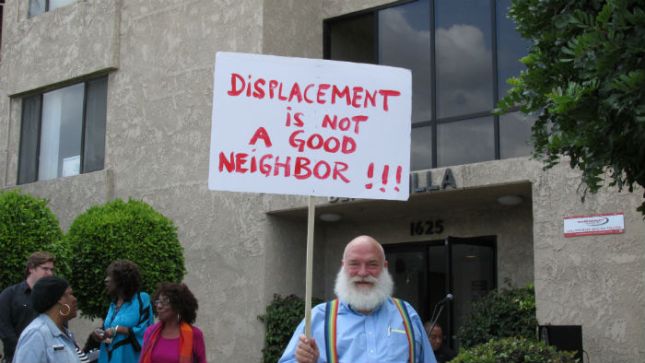 Then I talked to Walt Senterfitt, who lives in Los Feliz. He’s dealing with the same thing at his building, and to fight the evictions he’s helped organize the Rodney Drive Tenant Association. He feels that renters need to band together in order to push back. In recent years, thousands of Angelenos have been forced out of their apartments as landlords decide to pursue wealtheir tenants. It’s hardly surprising that the homeless population has increased sharply if you look at the all the people who have been evicted so that owners can jack up rents.

Hopefully the passage last year of AB 2222 will put a stop to this trend. But it won’t help any of the people I spoke to yesterday, because their landlords started the process before the bill was signed into law. Rents are skyrocketting across the city, and tenants in rent-controlled buildings will have a hell of a time finding a new home for a comparable price. It’s especially hard for seniors who are living on a fixed income.

Here’s the link for the Rodney Drive Tenant Association, if you want to get in touch with them.

And if you believe that the LA City Council needs to take action to create more affordable housing, send them an e-mail and let them know how you feel.

2 thoughts on “Trying to Keep a Roof Over Their Heads”