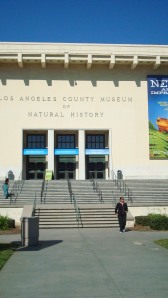 There were two things I’d been wanting to do for a while. The first was to visit the Natural History Museum to see their show on LA history. The second was to take some photos of the Sixth Street Bridge, which is slated to be demolished and replaced, although that may not happen for a while. So Tuesday morning I took the Red Line down to Seventh and Figueroa, where I transferred to the Expo Line. Pretty soon I was standing on the platform at the Exposition Park station.

It might have been twenty years or more since I’d been to Exposition Park. Walking toward the fountain at the center of the gardens was sort of like walking into the past. In part, that’s because of my memory of visiting the museums as a child. But also, the three buildings that border the park are massive reminders of the ornate, imposing architecture that was considered appropriate for museums a hundred years ago. In fact, the Natural History Museum is celebrating its one hundredth anniversary this year. Their web site offers a brief history, which you can read by clicking here.

The photo above shows the current entrance to the museum, which presents a modern facade. It’s an interesting contrast to the NHM’s original entrance, which is what you see in this next photo. 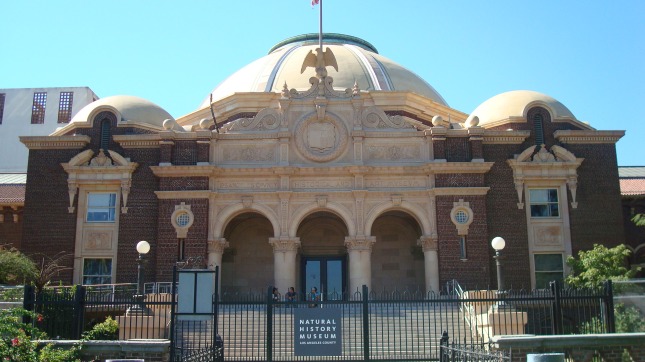 The exhibition I went to see, Becoming LA, was really good. The curators did a nice job of presenting the area’s multi-layered history, weaving together the threads of all the diverse groups that made the city what it is. Of course Becoming LA is just the latest in the recent onslaught of shows about Los Angeles. Local museums have been giving a lot of attention to the city in the past few years. I’m all in favor of highlighting LA’s art, culture, etc., but at times it seems like we’re crossing the line into bombastic self-promotion. Which, I guess, isn’t really that surprising.

After I was finished with the museum, I took the bus north on Vermont to Olympic, where I had to transfer. This put me right in the heart of Koreatown. There’s an interesting vibe in many parts of Koreatown, which I think has to do with the zillions of small businesses competing for your attention. There are numerous strip malls, and they all seem to be bursting with restaurants, karaoke bars, tech retail outlets, nail salons, etc.. Here’s one example….

But the look of Koreatown is changing. In the image below you’re looking up Vermont toward Wilshire, where you can see two high-rise towers that combine residential and retail. I understand some Koreatown residents aren’t too happy about the wave of high-density development that’s hitting their area. I doubt that bothers the City Council, though, and it certainly doesn’t bother Mayor Garcetti. They are all one hundred percent committed to serving the developers who put them in office. Click here for more info about this massive project. 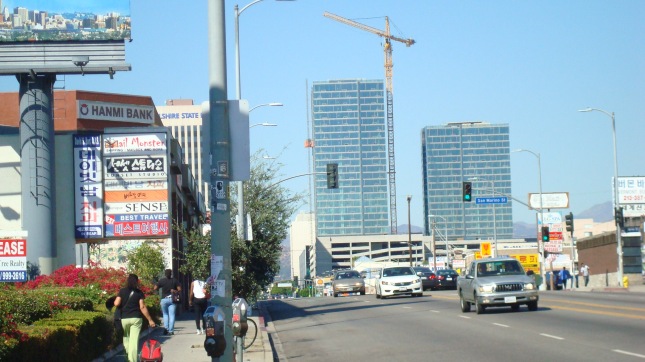 The bus showed up and I got on. A few minutes later I got off at the end of the line, Sixth and Maple. I headed up Maple and over to Wall. As I was walking along, I heard a voice behind me.

“Excuse me. Are you a tourist?”

He must’ve seen the camera I was holding.

“Oh. Cuz I was just wondering if you knew this is a really horrible area.”

I laughed, but he had a point. The street was filled with people who were living on the sidewalk. The desperation was palpable. I can’t say I was really afraid, though. I spend a fair amount of time downtown, and I’ve walked through skid row now and again. If it was night, I probably would be worried. But in the harsh light of day, these people looked too beaten down, too demoralized, to be a threat.

We walked along together for a block or so. I told him I had the camera because I wanted to shoot photos of the Sixth Street Bridge. He knew the bridge was going to be replaced, but he felt it would be a long time before work actually started. Somehow we got talking about the LA City Council, and we both agreed they have absolutely no respect for the law. Interesting how the one thing that seems to bind Angelenos together is our absolute distrust of the people at City Hall.

Then we went our separate ways. I headed over to Little Tokyo for a bowl of udon and a beer. Then I started walking down Central to Sixth.

It was late afternoon. The streets were mostly deserted. There were few cars and fewer people. I walked past the Woori Market’s empty parking lot. It’s been closed for a while. There were large warehouses, like Los Angeles Cold Storage. A couple small restaurants. A lot of places have security fences, and a few were topped with barbed wire.

The bridge rises up over the warehouses and the railroad tracks. As you get near the mid-point, the landscape below stretches out for miles in every direction. Here’s a shot of the bridge looking back toward downtown. 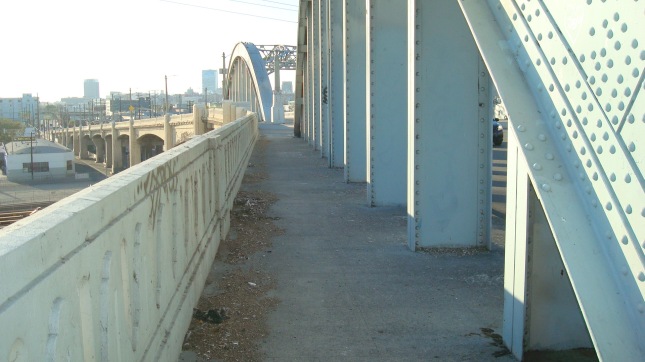 And here’s another looking down on the LA River. 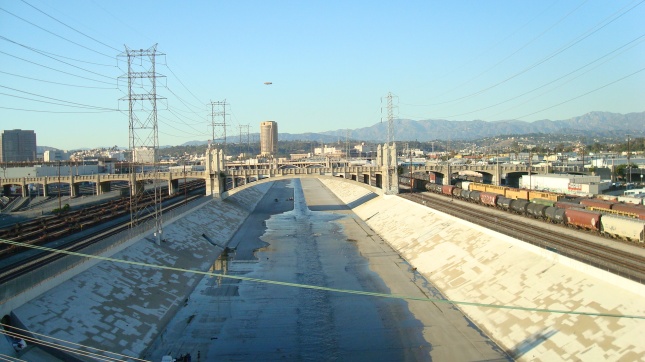 Freight cars covered with graffiti sit lined up below.

And here’s another shot of the downtown area.

On the other side of the bridge, Sixth Street becomes Whittier Blvd., which leads you into Boyle Heights. I waited for the bus in front of Carnitas Michoacán #3, which seemed to be doing steady business. And then the seven twenty showed up to take me home.