The streets directly adjacent to the proposed Millennium Hollywood project are actually fairly quiet.  Traffic impacts on Vine, Ivar and Argyle will probably not be too severe.  It’s the major corridors that serve this area that will have difficulty accommodating the increased traffic.  Take Cahuenga Blvd. for instance….

Anybody who’s driven north on Cahuenga at rush hour knows the traffic can get pretty heavy.  If you haven’t made the trip yourself, here are a few photos that will give you an idea of what it’s like. 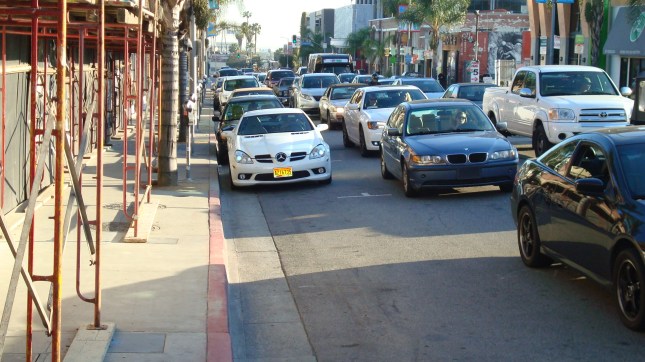 The photo above was taken on the 1500 block of Cahuenga, east side facing south.

This photo was taken on the 1700 block of Cahuenga, east side facing south.

Now we’re on the 1800 block, just above Yucca, again east side facing south. 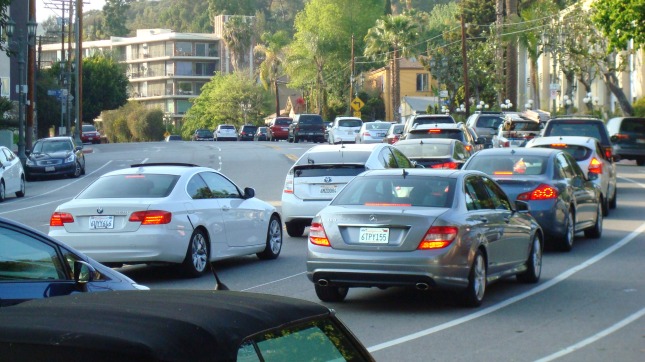 Same location as the last photo, but now facing north.

These pictures may make it seem worse than it actually was on the days I was shooting.  I want to make clear that even though it was stop and go, traffic was moving.  In most cases the line of cars at an intersection were able to make it through on the green.  But as you can see, rush hour on Cahuenga is no picnic.

Keep in mind that these pictures were taken in March.  You should see what it looks like after the Hollywood Bowl season begins in June.  That’s when things really get scary.    On Bowl nights the traffic can start slowing as early as four, and rush hour can last til around seven.  When shows are sold out, Cahuenga, Highland and the freeway tend to look like parking lots.  And don’t forget there are additional performances scheduled outside the regular Bowl season.  Coming up in the next few months we have Fleetwood Mac, Andrea Bocelli and the Playboy Jazz Festival.

Now, in theory, the people who live in the Millennium Hollywood towers would have no reason to be involved in this rush hour morass.  So let’s assume that none of them will ever have any reason to be travelling through the Cahuenga Pass between four and six pm.  Still, the people who work at the complex will need to get home at the end of the day.  And many of them will wind up on Cahuenga at rush hour.