The CapitolRecordsTower is a Hollywood landmark.  It is totally unique, and helped set the stage for the era of space age design.  But it’s not just the look of the structure that makes it significant.  It’s one of a number of buildings designed by Welton Becket and Associates within the city of LA.  Becket was involved in creating some of the city’s most distinctive buildings, including the Pan-Pacific Auditorium [destroyed by fire] and the MusicCenter.  His work helped to define the look of mid-century LA.

Capitol Records is one of two Becket buildings that have become Hollywood icons.  The other is the Cinerama Dome, located just a few blocks away.  In light of the threat that the Millennium Hollywood project poses to the status of the former, it might be useful to review the recent history of the latter. 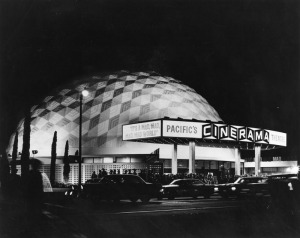 In the late nineties, Pacific Theaters presented a plan for redeveloping the Dome.  There was a huge public outcry, because in its initial form the plan would have meant ruining the Dome and building a nondescript mall around it.  To Pacific’s credit, they listened to the community, went back to the drawing board and came up with a far better design.  Not only did they refurbish the Dome and restore it to its place as a Hollywood landmark, they also added a beautiful state-of-the-art multiplex which includes a restaurant, bar and patio.  The completed complex was a welcome addition to the community, and it offers the best experience you can have in a commercial movie theatre.

It’s doubtful that the developers behind the Millennium Hollywood project will reconsider their plans, which would erase Capitol Records’ presence on the Hollywood skyline.  I like to think that the LA City Council might actually listen to the community and reconsider their support for the project.  But maybe that’s too much to hope for.