Even if you’ve lived in a city your whole life, you probably only know a small part of it. We tend to stay in our own little worlds. There are the neighborhoods we know, the hangouts where we feel comfortable, the landmarks that are familiar. In our mind that becomes the map of the city. Everything else becomes irrelevant or invisible.

For a long time San Fernando Road was invisible to me. It’s one of the oldest streets in LA, and I’ve been travelling along it since I was a kid, but I never paid any attention to the landscape that was sliding by. It was just a route I’d take to get from one place to another.

Last year I was riding down San Fernando on the bus and I looked out the window. I can’t say I saw anything remarkable, but I started to notice things I’d never paid attention to before. I saw the railroad tracks and the industrial parks. The markets and the restaurants. The trees and the billboards. It’s not a pretty stretch of road, and there’s not much that would attract people from other places, but there’s a lot going on. There are manufacturing and recycling centers, there are auto repair shops and wholesale outlets, and there are trucks and trains that run up and down the road all day long. In other words, there are a lot of things that are made here or processed here or transported through here that touch our lives every day.

San Fernando Road has been called different things over the years. The state and local governments have defined it in different ways. Even now it’s called The Old Road up north in Santa Clarita. In Burbank it’s called San Fernando Boulevard, and it’s interrupted briefly by a mall. When it crosses the LA border again it turns back into San Fernando Road, and it runs all the way into Downtown.

For now I’m just going to focus on the stretch between Hollywood Way and Tuxford. As San Fernando Road leaves Burbank behind, you have the hills on one side….

And Burbank Airport on the other.

The road is lined mostly with one-story buildings. 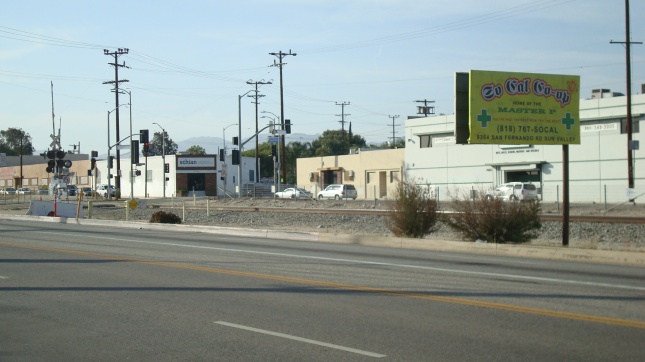 Here and there the monotony is broken by a few trees or a billboard.

There are all kinds of businesses, many of them dealing with recycling things in one way or another. 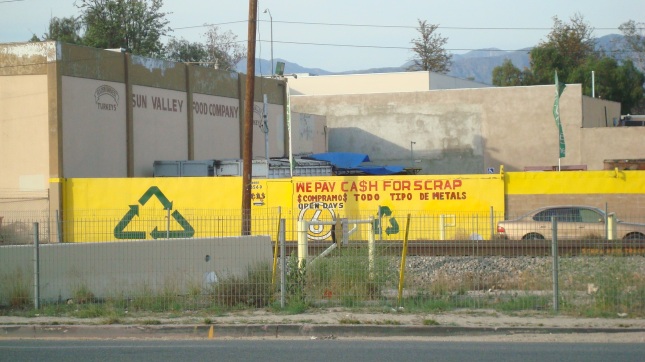 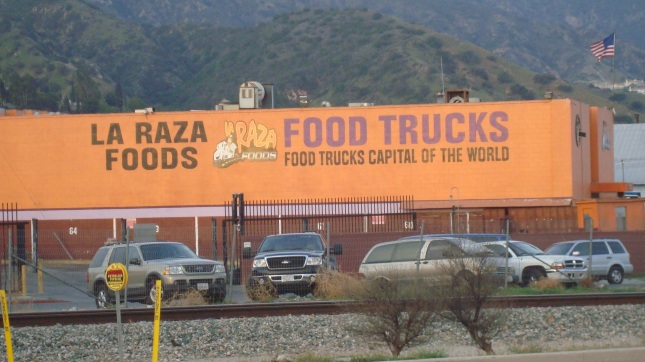 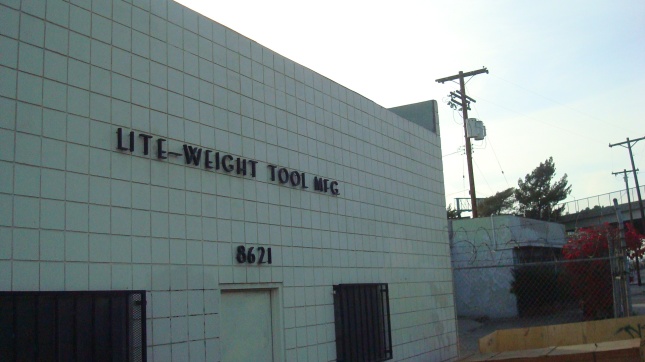 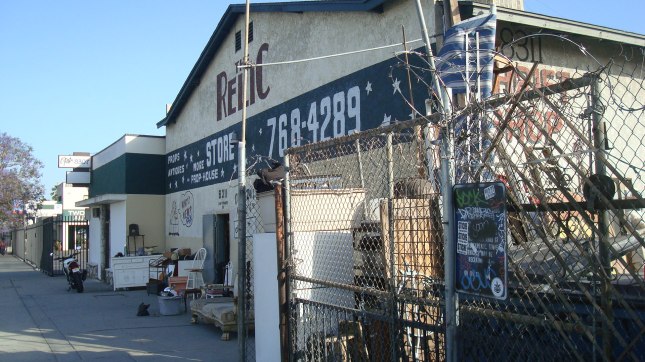 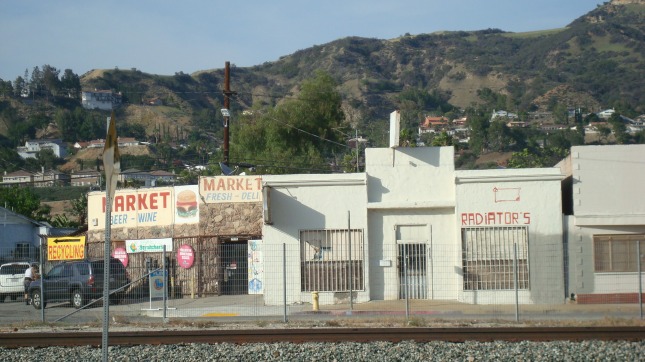 There’s even a couple of places for those seeking a spiritual experience.

Security is obviously a concern. 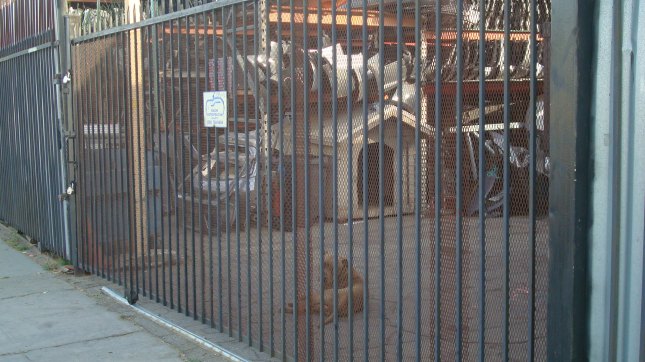 a guard dog eyes me suspiciously

Here’s a relic from the past.

This is one of the few visible reminders of the days when aerospace was a major industry in the area. Lockheed came to Burbank back in the twenties. During and after WWII it employed tens of thousands of workers. The aerospace industry was a major factor in driving the post-war growth of the San Fernando Valley.

This is the intersection of San Fernando and Sunland.

traffic at San Fernando and Sunland 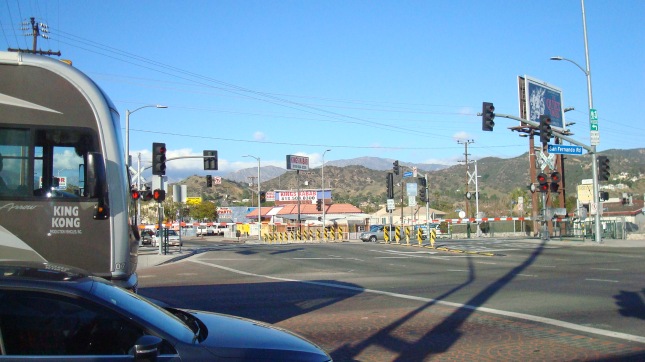 another shot of San Fernando and Sunland

There are a lot of businesses that deal in stone, either polished or pulverized. 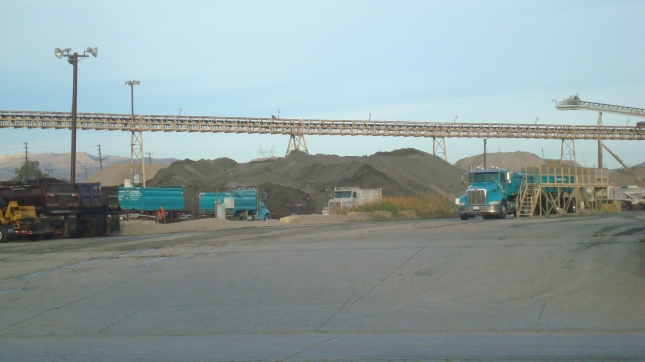 The railroad runs right down the middle of San Fernando Road.

And here’s the Metrolink, a commuter train that serves Southern California. 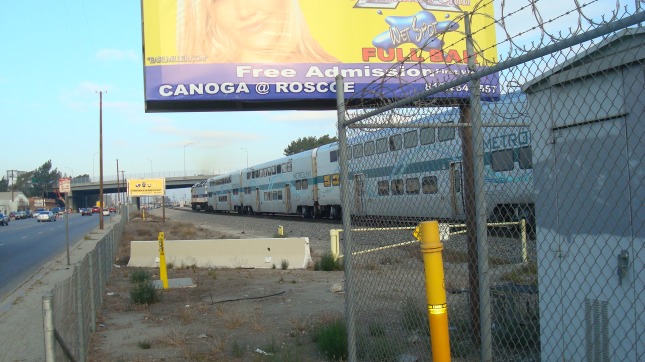 The entrance to the Golden State Freeway is on Tuxford just a short block from San Fernando. The next few shots were all taken along Tuxford.

You can see all kinds of trucks going up and down Tuxford.

And you can see the traffic on the freeway gets pretty bad at rush hour.

I have no idea what this is about, but it seems to be tied to a place that buys junk cars. 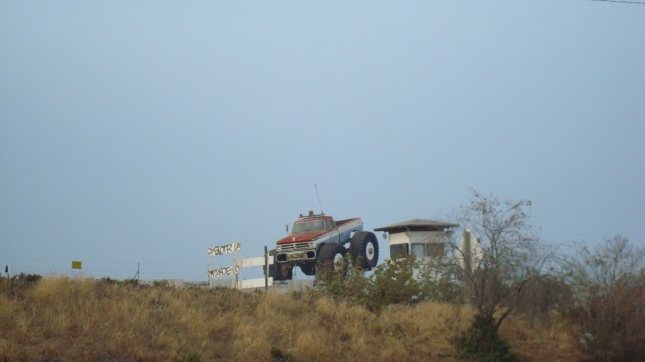 Lots of the billboards in this area carry public service announcements. 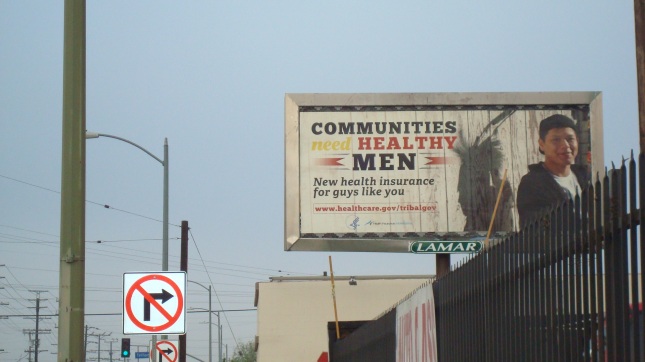 A shot of a guy waiting for the bus on San Fernando at Tuxford.

And this is what San Fernando Road looks like as the light starts to fade. 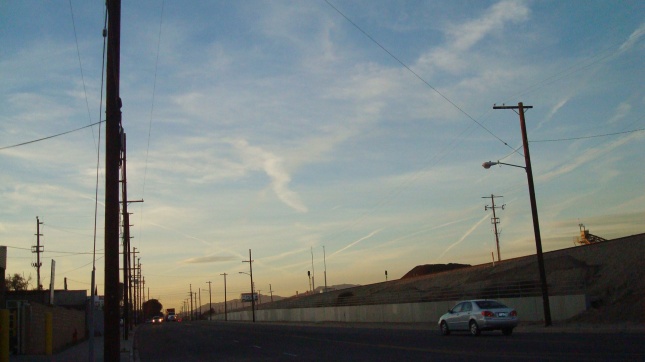