LA is suffering from an affordable housing crisis, but there is some good news to celebrate. Thanks to the efforts of the Skid Row Housing Trust (SRHT), formerly homeless people are getting a roof over their heads and a place in the community. The SRHT is using innovative approaches to creating housing in the Downtown area.

Homelessness is a complex problem. It’s not just a matter of giving someone a place to live, because people living on the streets are often struggling with a variety of issues. In the first place, finding a job, which can be tough if you don’t have skills that are currently in demand. Depression, mental illness and substance abuse are also common problems, and these are not solved simply by giving someone the keys to an apartment.

But having a place to live is the first step. And the SRHT offers assistance to people grappling with other issues by creating permanent supportive housing. This means that the residents living in these communities have access to counseling, job training, health care and other services in order to get their life back on track.

The SRHT has been working on two new projects in Downtown. First, let’s take a look at the Star Apartments…. 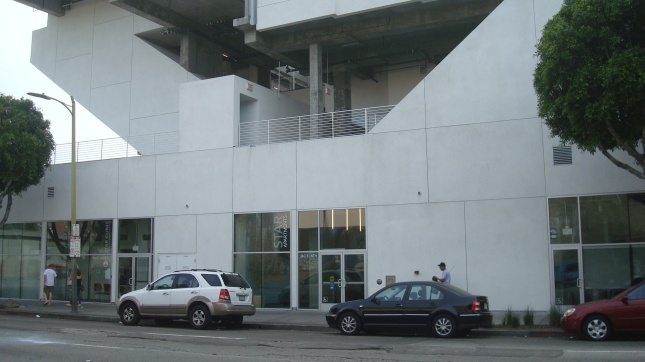 The Star Apartments are located near the corner of Sixth and Wall. The project was designed by Michael Maltzan Architecture, and they used an interesting approach. The site was occupied by a one-story building, which they wanted to expand to create more units. The solution they hit on was stacking pre-fab cubes on top of the original structure, which in addition to being fast and economical, resulted in a striking piece of design.

You can read more on Maltzan’s web site.

Next, check out the New Pershing Apartments at Fifth and Main. This project actually combines two structures, the Pershing Hotel and the Roma Hotel, built in 1889 and 1905, respectively. The new design, by Killefer Flammang Architects, preserves original elements of the exterior. In addition to the residential units, the New Pershing will also offer a courtyard, two recreation decks and planters for gardening.

First let’s look at a couple of shots taken while the project was under construction, back in October of 2014. The first was taken from the corner of Fifth and Main.

This next photo was taken on Main, directly across from the building.

And another shot from Fifth and Main.

Here’s the article that the Downtown News ran on the New Pershing earlier this month.

You can find more information about the SRHT’s activities by visiting their web page. And if you want to support their efforts, I’m sure a donation would be welcome.