The last couple of weeks have been intense. Protests throughout the nation sparked by the killing of George Floyd. The National Guard being deployed in major cities. Viral videos exploding across social media. Politicians scrambling like mad to try and cover themselves. It’s been a wild time.

And it’s been pretty wild here in Hollywood. I have not personally been involved in any protests. I’ve been mostly hanging out in my apartment, scanning the news for the latest developments and listening to the sirens wailing outside. And even without having been in the thick of the crowds, it’s been an emotional rollercoaster. Horror over the death of George Floyd. Excitement about the growing protests. Anger over the looting. Depression at seeing the National Guard on LA’s streets. Again.

And then today, I actually feel kind of happy and kind of hopeful. Let me tell you how I got here….

Like I said, I haven’t been to any of the protests, but I was following the news reports of the massive gathering last Tuesday in Hollywood. The next morning I was out on Hollywood Blvd., and here’s some of what I saw.

LAPD action at Hollywood and Vine.

Photographer at Hollywood and Vine with her camera trained on the LAPD. 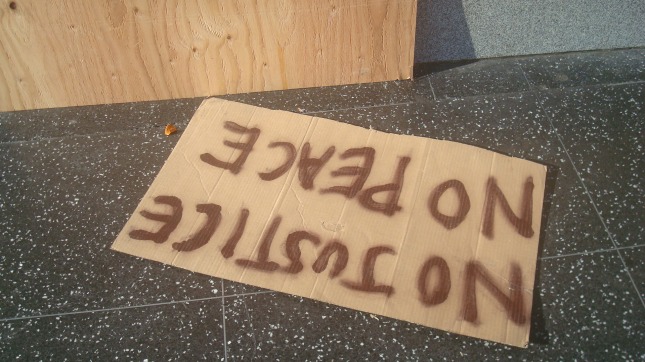 It was definitely depressing to see the boarded up windows and the National Guard vehicles parked on the boulevard. I have vivid memories of the unrest that rocked LA back in 1992. Walking down the street on Wednesday morning it was hard not to draw parallels.

On Saturday afternoon I needed some groceries and when I walked down to the market I caught the tail end of another gathering. A few hundred protesters were blocking the intersection at Hollywood and Vine. Lots of car horns honking. It was hard to tell whether the drivers were mad at the delay or glad to see people taking to the streets.

Protesters at Hollywood and Vine.

Some protesters were sitting on top of cars parked in the street.

Protesters are demanding that funding for the police be cut.

And at the same time that I’m trying to follow what’s happening locally, the national news media is feverishly trying to document the protests, chase down the politicians, and keep up with the seemingly neverending stream of daily controversies. Elected officials across the country are trying to demonstrate their empathy and understanding, with wildly varying degrees of success. A lot of promises have been made, but we’ll see what those promises mean six months or a year from now.

I wish I could say I was completely enthusiastic about this massive uprising, but actually I had a lot of doubts about where this is all heading. First, I don’t have much faith in politicians, and I’m pretty certain that for the most part the carefully thought-out statements they’ve been feeding the press over the last week or so will quickly be forgotten. Second, while I think the protests are a great way to start a movement, making real change happen means taking things a lot farther. It’s exciting to see so many young people take to the streets to demand justice, but the only way to ensure that justice is delivered is to stay on top of elected officials, show up at city council meetings and go to the polls on election day. In other words, it takes years of difficult, sustained work to guarantee progress. Sure, I’m glad to see thousands of people marching for justice, but I wonder if these same people will still be on board for the less exciting and more challenging job of re-writing our laws and re-thinking our budgets.

But today all my pessimism magically disappeared. Not to say all my doubts are gone forever, but this afternoon they were pushed way into the background, at least for a while. As I walked along Hollywood Blvd., I saw that artists had transformed all the boarded-up windows into canvasses bursting with color. These are the images that greeted me when I walked out of the Red Line station at Hollywood and Vine. 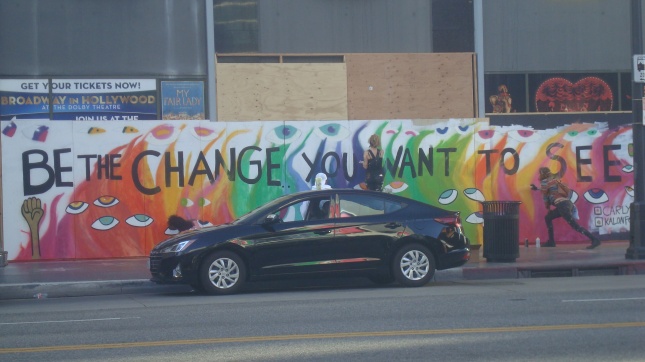 Be the Change You Want to See

Artists at work transforming the streetscape. 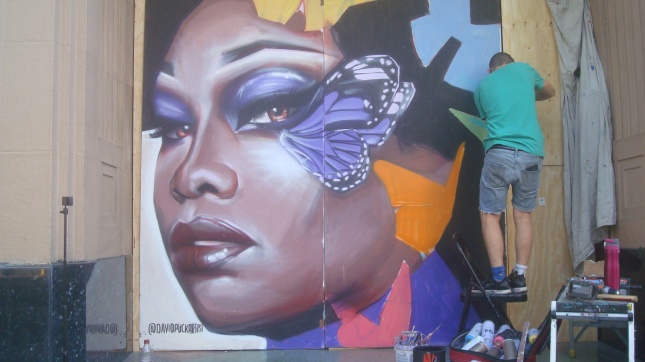 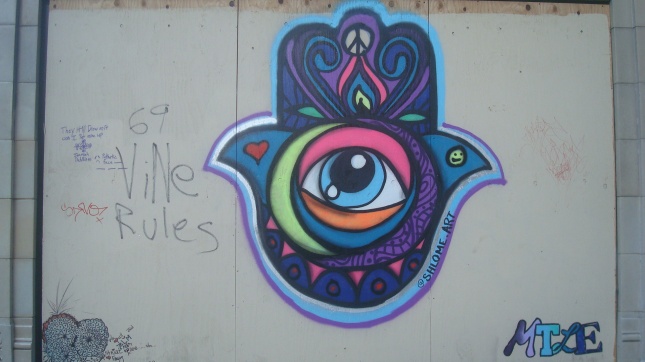 A splash of psychedelia.

Like I said, it’s not as though I’ve buried all my doubts, but I forgot about them for a little while. Walking down Hollywood Blvd. today, looking at all this amazing art, I felt happy. I felt hopeful.