If you live in LA, you’re probably aware that the City is using all kinds of media to get the message out about water conservation. And if you’ve been paying attention to the news, you may also know that Mayor Garcetti is gearing up for his 2017 re-election effort. Why am I leading off with these two apparently unrelated items? Well, because actually it seems they are related. Even though they shouldn’t be.

I was standing at a bus stop where the bench displayed one of the water conservation ads. The first time I saw it I didn’t pay much attention. It was just another public service announcement, and I’d already gotten the message about cutting my water use. But after looking at it a few times, something caught my eye. Like most PSAs, it carried a few logos to let you know who was behind it. And one of them belonged to our Mayor. 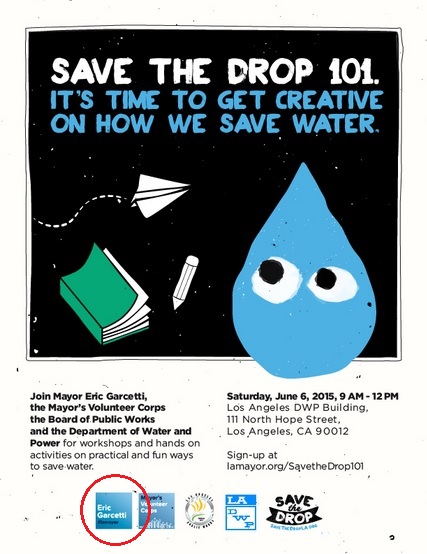 Poster for Save the Drop campaign

You’re probably asking, So what? Shouldn’t the Mayor be throwing his weight behind this campaign? No argument there. It’s an important initiative. The thing that struck me was that the logo used here was remarkably similar to the one Garcetti used when he was campaigning for mayor in 2013, which is almost exactly the one that he’s using for his re-election bid.

If you live in LA, you must’ve seen it by now. A blue square containing the Mayor’s name in crisp, white, sans-serif type. There are a few different versions. The text varies slightly depending on when and where it appears. It’s a nice piece of design. It could suggest a clear blue sky, or crystal clear water, or a kind of zen serenity, or almost any other abstract positive association, which is one of the key concepts behind political advertising. It suits Garcetti perfectly. He’s a master salesman, and he’s spent several years refining his own brand. The hip, smart, 21st century guy who’s leading us all toward a brighter future.

All that’s fine. I congratulate the Mayor on his marketing savvy. But he should not be using a logo designed for his campaign on a PSA paid for by our tax dollars. Aside from the issue of using public money to support a private brand, this also confuses the City’s efforts to educate the public with the Mayor’s efforts to get himself re-elected. And this goes beyond the water conservation campaign. If you look at the City’s web page for the Mayor’s office, it displays the same logo. 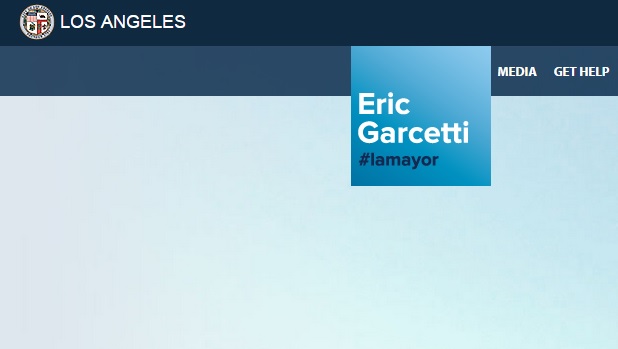 Screen shot from the home page for the Mayor’s Office 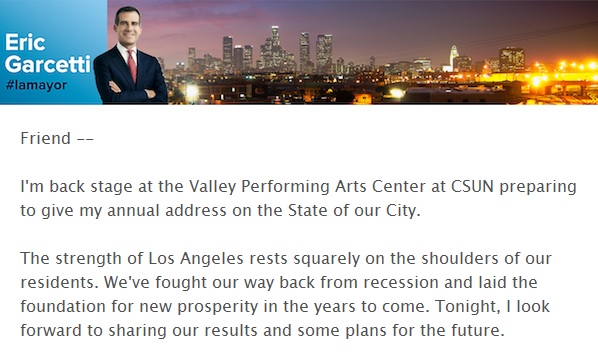 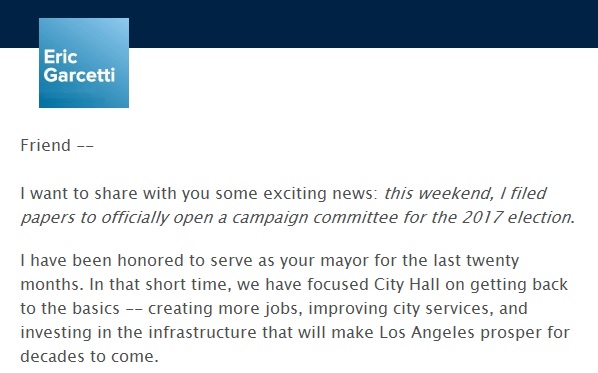 And this is really a problem. Eric Garcetti is the Mayor, that is, he’s an individual who’s been elected to serve in that capacity. But he is not the Mayor’s Office. That’s a separate entity which has been occupied by many people over time. To use the same graphic for communications from a politician seeking re-election and an office that exists to serve the people of Los Angeles creates a dangerous confusion.

If Garcetti is unhappy with the traditional seal for the Mayor’s office, he should ask City staff to redesign it, but it should be completely distinct from the logo he’s using for his re-election campaign. The Mayor’s communications regarding official business need to be clearly differentiated from his efforts to win another term. Sure, most politicians use their office for self-promotion of one kind or another, but we shouldn’t be subsidizing the practice. The Mayor needs to remove any graphics related to his campaign from all media used by the City to conduct official business. And he needs to do it now.