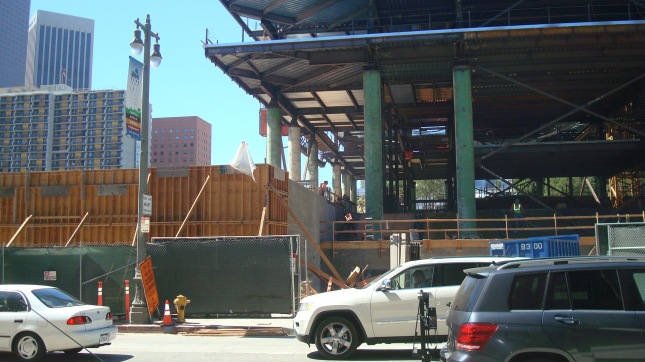 Downtown is exploding. There’s so much construction going on I can’t even keep track of it. Massive new office and residential buildings are springing up all over the place. There are also efforts underway to revitalize a number of older buildings. Some of this stuff is cool, some of it is dumb, but I’m less concerned about the quality of the individual projects than I am with the cumulative impact of all this construction. More on that later.

Let’s start by sampling a few of the projects currently under construction…. 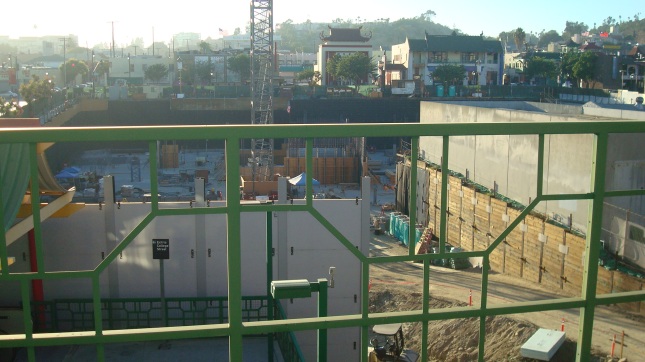 This is the Blossom Plaza, which combines retail and residential, including a fair number of affordable units. It took years for this to get off the ground, and there was a recent hitch when workers uncovered remnants of the original Zanja Madre, but things are moving forward. Curbed LA has been following the story for a while, and you can read more about it by clicking here.

I had a harder time finding current info about this project. The most recent report I read said this was a 240 unit complex being developed by the Irvine-based Sares-Regis Group. Whatever it is, it looks like it’s going to be huge. The site is located at Second and San Pedro, right next to….

….the recently completed AVA Little Tokyo, another massive mixed-use structure. Apparently young people are flocking to Downtown LA these days, and developers are doing everything they can to capture that crowd. Check out this ad, seen in one of the windows on the ground floor. 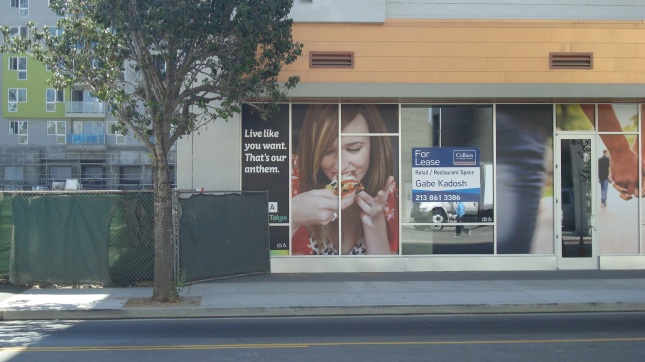 The way I read this is, “If your highest priority is mindless self-indulgence, this is the place for you.”

And since we don’t have enough luxury rental units in Downtown LA already, Carmel Partners has generously agreed to build 700 more. As you can see in the photo below, it’ll be a while before the project is complete. 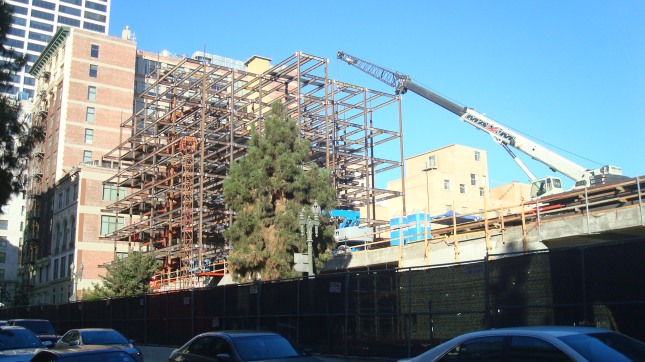 You may want to put a deposit down soon. Given the list of amenities, I don’t doubt that the Eighth & Grand complex will be popular. I was sold when I heard about the rooftop pool surrounded by cabanas. For more details, click here. 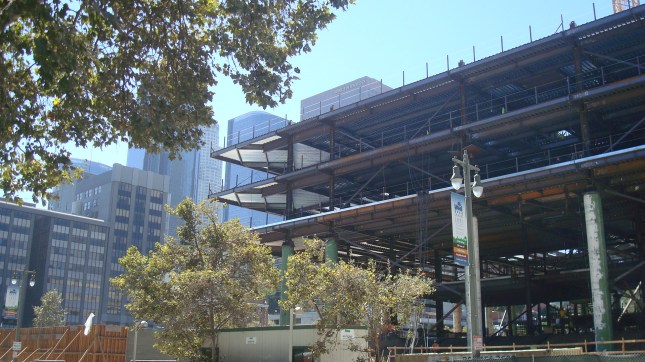 But let’s talk about a project that might actually benefit the people of Los Angeles. Here’s the new federal courthouse, which is finally going up after being delayed for years. The courthouse is just one component in a larger scheme to revitalize this part of the civic center. Building Los Angeles offers a rundown on some of the related efforts.

Honestly, of all the projects under construction in Downtown LA, the only one I can really get excited about is The Broad. It’s still a long way from completion, and the web site just says that it will open in 2015. But it’s something to look forward to. And they’re already doing some cool programming. Click here to find out what’s going on.

And let’s wrap it up with the New Wilshire Grand. It’s said that when the project is completed, this will be the tallest building west of the Mississippi. Who cares? I’m so tired of this kind of development. Does this really have anything to do with making the city a better place to live? Or is it just another monument to greed and vanity?

There’s a lot of talk right now about how LA has to embrace higher density development. Fine. There are good reasons to create a more compact city, and certainly sprawl has been a major problem throughout our history. But can anybody demonstrate a need for skyscrapers of this size? And looking at the bigger picture, do we really have the infrastructure to support development on this scale? I’m thinking especially of water, since we are in the middle of a drought. The projects I’ve highlighted here are just a few of the dozens that are either currently under construction or in the permitting process.

When I look at the avalanche of development that’s hitting Downtown LA, I have to ask if anybody at City Hall is thinking about the future, because I don’t see any evidence of rational planning. Instead, I see an onslaught of construction driven by developers who are falling all over themselves to get in on the gold rush. I really question whether the Mayor or the City Council have given any serious thought to how this massive growth spree is going to affect LA down the road. I wish I could believe they were really concerned about the well-being of the people of Los Angeles. It seems more likely that their chief concern is keeping their developer buddies happy.