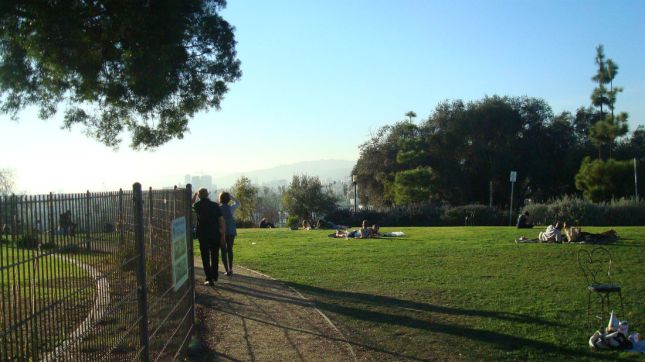 Years ago I used to live on Edgemont between Hollywood and Sunset. One of the great things about the neighborhood was that Barnsdall Park was right across the street. I used to go there fairly often, but then I moved away, and Barnsdall kind of fell off my radar. I’ve been meaning to go back for years, and this last weekend I finally made the trip.

A cyclist resting at the base of the hill.

There are lots of parks in urban areas, but somehow Barnsdall seems different. I think this is mostly because it sits on top of a hill. As you climb the stairs, the sounds of the city, the traffic, the sirens, the helicopters, all seem to fade into the background. Then you get to the top and there are these amazing panoramic views of Los Angeles.

The Griffith Observatory is perched on the hills opposite Barnsdall Park.

Another reason the park is special is that it’s home to Frank Lloyd Wright’s Hollyhock House. Completed in nineteen twenty three, this was Wright’s first project in Los Angeles. I’ve only been inside once, but the memory has stayed with me. The house is beautiful and unique. Unfortunately, it’s closed right now for restoration.

The entrance to Hollyhock House.

The west end of Hollyhock House.

We have the park thanks to the generosity of Aline Barnsdall, who donated it to the city back in the twenties. Originally from Pennsylvania, Barnsdall wanted to create a theatrical community on what was then known as Olive Hill. She commissioned Wright to design Hollyhock House, as well as several other structures, but the two parted ways and the complete plan was never realized.

Barnsdall Park is also home to the Municipal Art Gallery and the Junior Arts Center. For more information on the programs offered, follow the link below. 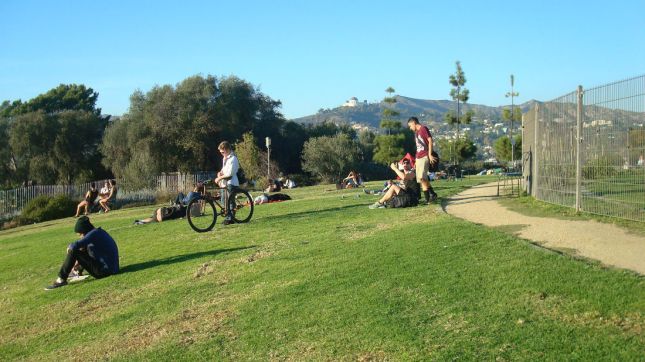 People on the grass at the western edge of the park.