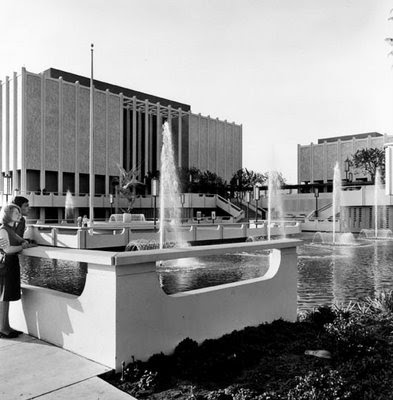 A view of LACMA as it was in the sixties

The Los Angeles County Museum of Art is undergoing some major changes. Swiss architect Peter Zumthor has been commissioned to design a completely new campus for the museum. All of the original structures, plus the Anderson Building (now the Art of the Americas Building) will be demolished to make way for a brand new campus.

It makes sense. Over the years LACMA has become kind of a cluttered mess. I loved the original Pereira design, three unobtrusive modern structures surrounding a spacious plaza. To my mind the addition of the Anderson Building in the mid-eighties was a huge mistake. Sure, it was great to have the extra square footage for exhibitions, but the building itself was awful. The central plaza was taken away, and a blandly oppressive façade now towered over the sidewalk at the Wilshire entrance. Two years later they added the Japanese Pavilion, which I have mixed feeling about. Inside, it’s a great space for displaying art and artifacts. Outside, it’s just kind of weird and tacky, and adds to the general visual confusion.

So I totally understand why the LACMA Board wants to start over, more or less from scratch. Zumthor’s design is pretty interesting. Below is a link to a slide show on LACMA’s web site.

There are a lot of good ideas here. I love the fact that the design allows for more interaction with the surrounding park. And I’m really intrigued by the concept of storing art in areas that would allow for public viewing day or night, all year round. This could turn out to be pretty cool….

But I couldn’t find any information on LACMA’s web site about when all this is going to happen. Making Zumthor’s design a reality will be a huge undertaking. The first step will be to demolish the four buildings that make up the core of the campus. And my guess is that it would take at least a couple years to complete the new structure. Which means LACMA’s exhibitions would be confined to the BCAM and the Resnick Pavilion for quite a while, although they might also look for a temporary space.

Big ambitious projects like this often sound really exciting in the planning stages. Then, when you start trying to figure out how to actually make it happen, the excitement fades as people realize what a huge challenge it will be. But I hope they can pull it off. This could take LACMA to a new level.