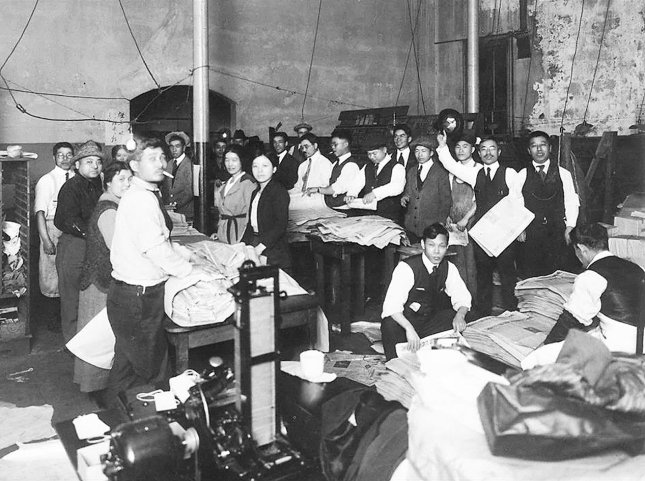 Recently a friend sent me a link to a story about the Rafu Shimpo, a Los Angeles-based newspaper that serves the Japanese-American community. Publisher Michael Komai released an open letter explaining that the paper has been losing money for years and is in danger of closing. Not a big surprise, but still sad news. Newspapers everywhere have been struggling to survive in a world awash in new media options. Technology offers more ways for people to get their news than over before, although I’m often surprised at what folks call “news” these days.

Newspapers may not disappear altogether, but they’re going to occupy much less space in our culture than they did thirty years ago. LA’s major English-language papers, the Times and the Daily News, have seen their circulation and their staff shrink drastically. Our Spanish-language daily, La Opinión, is a shadow of what it used to be. Many of the smaller publications that serve specific communities or cultures have gone on-line or gone away.

The disappearance of these small community papers is troubling. It seems to me we’re losing something important here. These little, independent publications came into being to give a voice to people who didn’t have one. They covered events and issues that were often underreported or completely ignored by the mainstream media. And even with stories that got lots of play in the media, these papers sometimes offered perspectives that weren’t being heard anywhere else.

No question, the internet also gives people a chance to make their voice heard, sometimes far beyond the boundaries of their community. But even though you can reach a huge audience through social media, sometimes it’s hard to figure out who you’re talking to. Two of the key factors that used to bind groups together were place and race. The internet can render both of those things meaningless, or at least effectively obscure their meaning. Is this a good thing? Nowadays people can create their own cyber communities based on the music they like, their sexual orientation, or TV shows they watched as children. You can make friends with people on the other side of the planet, and you don’t even need to speak the same language.

All of that’s great, but every once in a while we have to drag ourselves away from the net and get back to our lives in the physical world. Even if we’re not crazy about the place we live or the people we live with, we still need to deal with that reality. You may be able to fly in cyberspace, but if the sidewalks on your block are buckling, you could fall flat on your face when you go for a stroll. There are a zillion amazing musicians to be found on the net, but the musician who plays at the local bar, who may even be your neighbor, would probably really appreciate your support. And if your community is threatened by neglect or crime or overdevelopment, your only hope of turning the tide is by connecting with the people next door.

The internet can help with that. It’s one more tool we can use to create connections. But small papers like the Rafu Shimpo exist to keep people connected to what’s happening in their own community. Their whole purpose is to bring people together. It may be that advances in technology and market dynamics will slowly bury them. But we will be losing an important resource. Don’t kid yourself that social media is going to fill the void. Sharing kitty videos with a million strangers may be loads of fun, but in the long run you’ll be better off if you take the time to learn what’s happening in your own neighborhood.

Here’s a link to the letter from Michael Komai.

Open Letter from the Publisher of the Rafu Shimpo