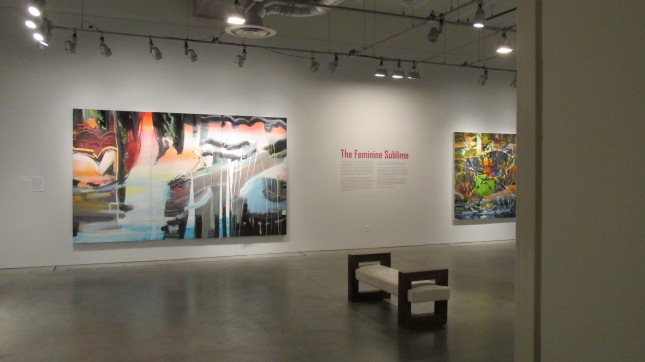 Last Friday I went to the Pasadena Museum of California Art to take in a show called The Feminine Sublime. It features works by five artists, and it explores different ways of perceiving landscapes and experiencing the environment. Up until the 20th century, men dominated painting, and they often viewed the natural world as something that needed to be tamed or transcended. These women have a different perspective, and are looking for different ways to engage with the environment.

The only artist whose work I was familiar with is Constance Mallinson. Her piece offered a panorama of the refuse that our culture produces. A vast, multi-colored mound made up of the stuff that we use and discard on a daily basis stretches out beneath a threatening, grey sky. 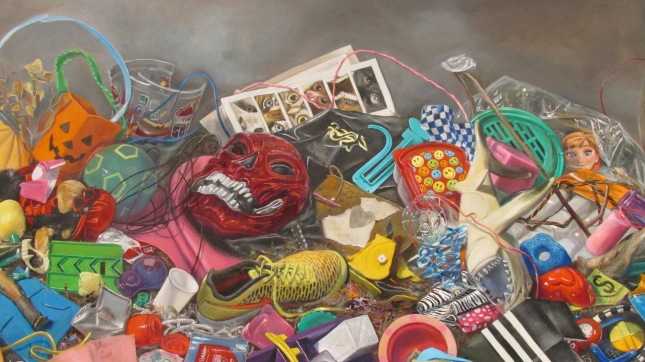 The name of this painting by Yvette Gellis is Oil, Earth, Fire, Wind and Water. The title says plenty.  The image is beautiful and violent. Harsh strokes of grey and black cut across the peaceful blues and reds that seem to float in the background. 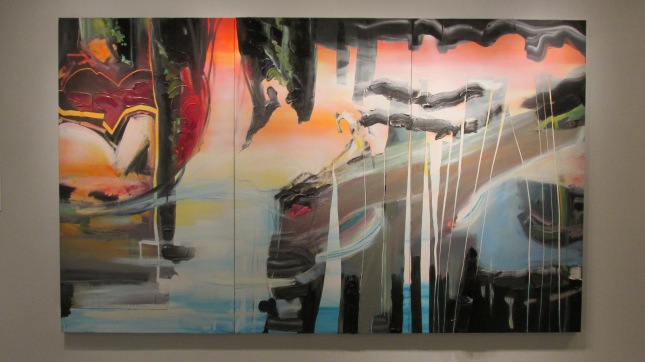 Looking at Marie Thiebeault‘s web site I found out she lived near the Port of LA, which is probably the most heavily contaminated area in the city. She talks about “witnessing […] the continual growth and rebuilding of this industrial expanse” and references “radar dishes, abandoned spy stations, and relics of WWII”. In her view, “… landscape can best mirror our culture’s complex relationship with nature, as well as contain and unfold the expanse of one’s imagination.”

I like posting about art because it gives me a break from writing about all the awful stuff that’s going on in this city, but when it comes to photographing art, I have to admit I don’t have the equipment or the skill to do it properly. I’m bringing that up here because these images don’t begin to do justice to Virginia Katz‘ work. The surface of this piece is dense and complicated, and it has the effect of pulling you through the surface into something dark and mysterious.

Land – Into the Abyss 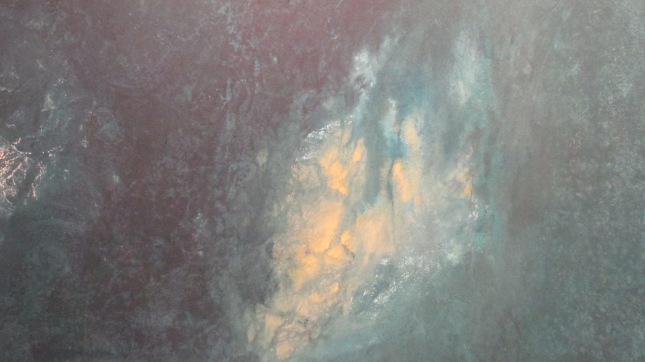 Land – Into the Abyss (detail) 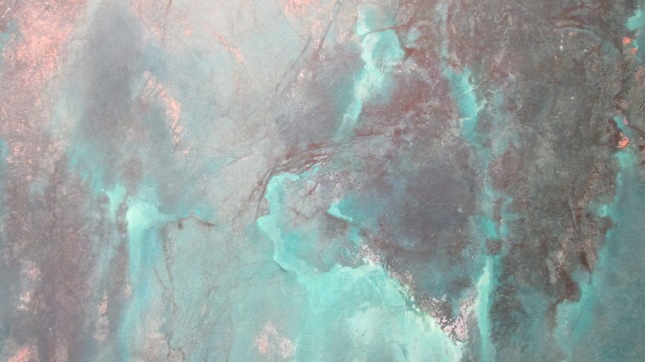 Land – Into the Abyss (detail)

The two pieces by Marion Estes are seductive and disturbing. The bright colors and vivid patterns immediately drew me in, but both paintings depict the catastrophic damage we’re doing to the environment. Looking at them was an unnerving experience. I was both fascinated and afraid.

My one complaint about the show? It was too small. I felt like it should have been three or four times larger. These are all gifted painters and they all have a lot to say.

The Feminine Sublime will be on view through June 3. You should go.