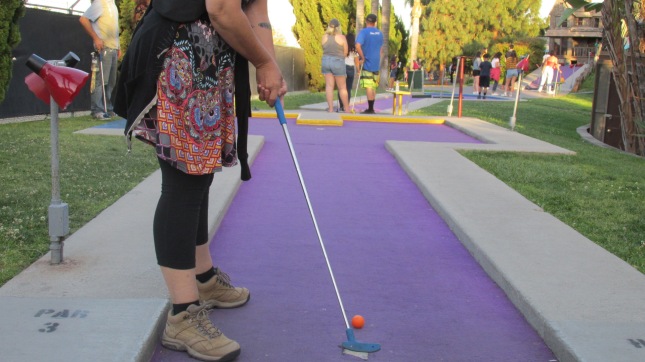 When was the last time you went miniature golfing? I hadn’t played for years. Actually, more like decades. But a while ago I was hanging out with some friends, and when the subject of miniature golf came up, it resonated deep within me. I knew that something had been missing in my life. Now I knew what it was.

Over the weekend I went with my friends Christen and Kasmira to a course in Sherman Oaks. I was surprised at how crowded it was. But on thinking about it, I realized that there are probably thousands of people like me who also feel that void in their lives, and that we were all drawn there to fill that void. 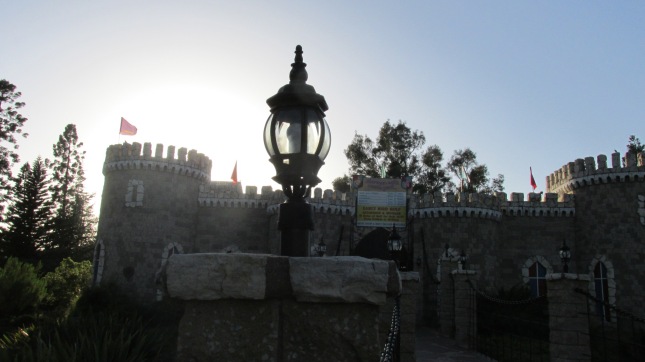 The sun was sinking below the castle parapet as we arrived.

To get to the golf course, we had to make our way through the arcade. That was intense. Honestly, I never play arcade games, but there’s something about the non-stop onslaught of piercing sound and day-glo colors that appeals to me. Though I probably wouldn’t want to spend more than fifteen minutes in that environment. 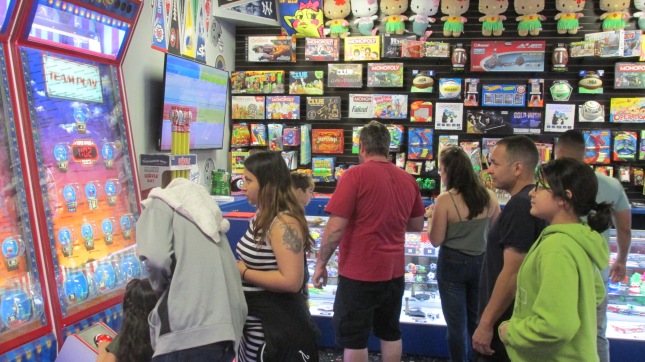 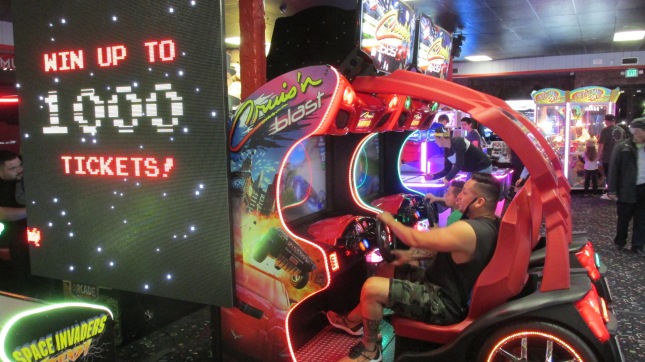 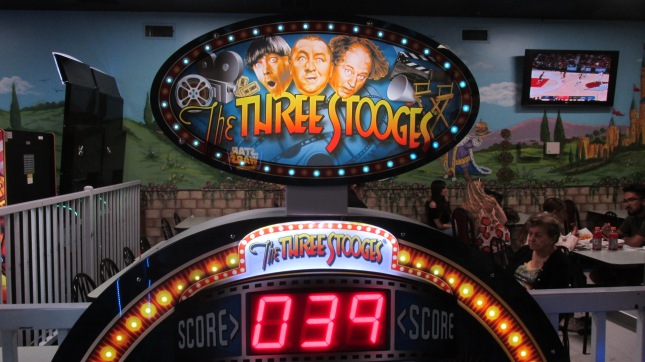 Obviously this is a class joint. 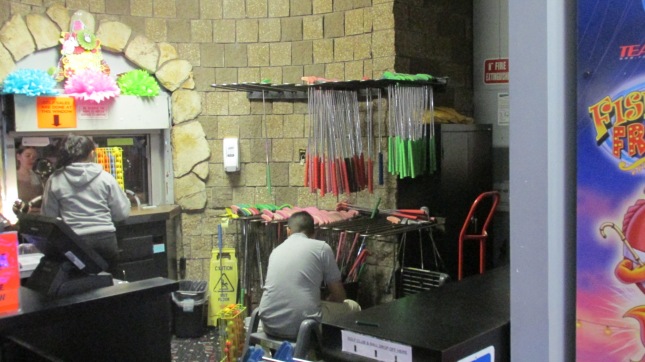 The crowd of golfers was keeping the staff busy.

Before you tee off, make sure you know the rules. 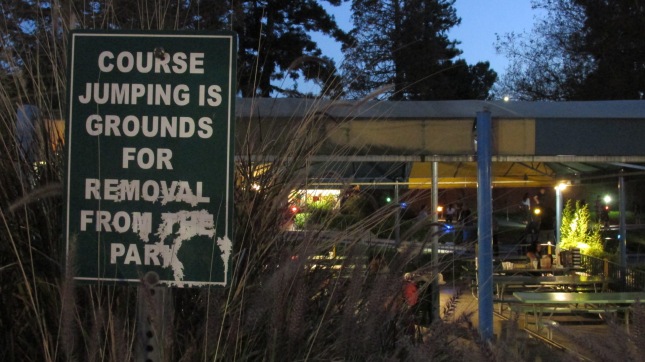 If you want to play another round, you have to pay for it. 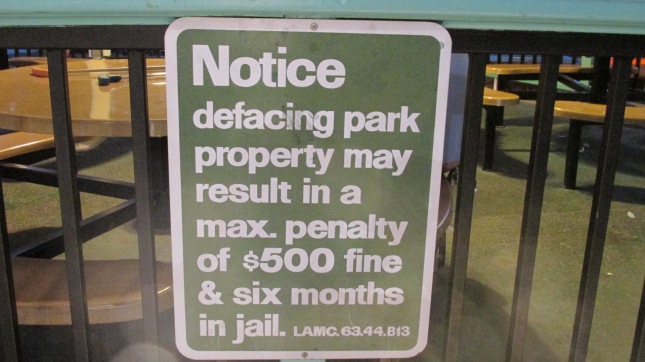 Keep that spray paint in your pocket.

I have to tell you, in the weeks leading up to our miniature golf rendevous I was subjected to a debilitating psychological assault by my “friends”, and it definitely took a toll. Playing the first few holes, I was a mess. I couldn’t focus, my shots were all over the place, and I went way over par. But with intense concentration I managed to balance my chi, and by the fourth hole I had steadied my game. 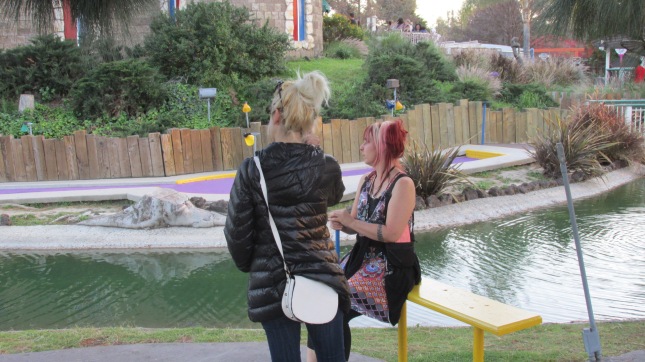 Waiting to tee off. 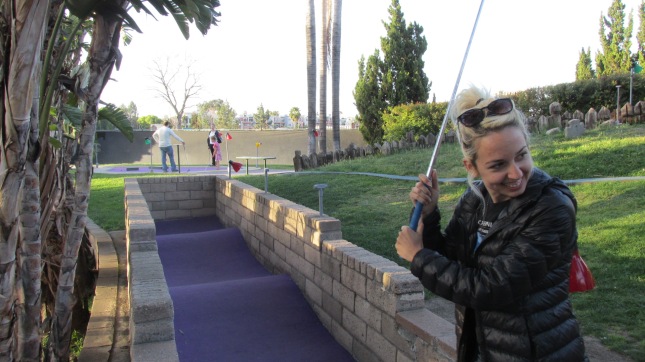 Gloating over a successful shot.

Unfortunately, I never recovered completely. When the totals were added up at the end of the game, Kaz was the winner, and I came in second place. But I’m not discouraged. We’re already talking about a rematch. 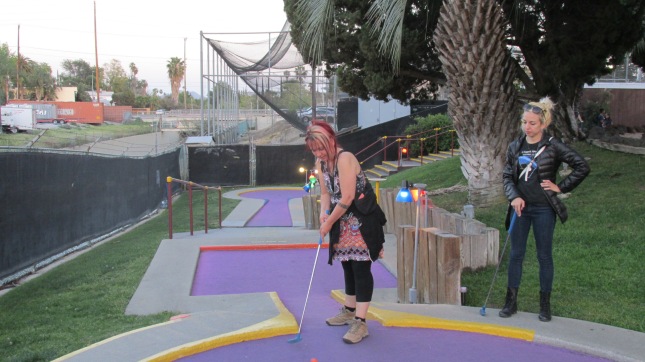 Sometimes the layout was challenging.

In spite of the humiliation of ending up as “the first loser”, I have to say I had a great time. The news is so bad these days, it was great to get away from the real world for a little while. It was a mild April night in the Valley. There were kids running around. We chatted with some of the other folks on the course. It was a great way to unwind. 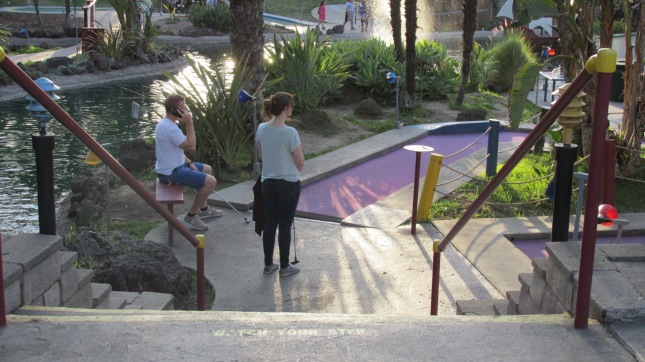 On this course nobody minds if you pull out your phone.

While we were strolling around I was checking out the scenery, both on the course and beyond. Looking over the fence to the north I saw what looked like a desolate urban wasteland. But when I said something about it to Christen, she told me it was a training academy for the Fire Department. Apparently during the week it’s filled with recruits learning how to fight fires. Not so desolate after all. I stopped to get a shot of the structures beyond the fence. Kaz wondered aloud whether the barbed wire was to keep us out, or to keep us in. Way too heavy a question for a miniature golf course. We moved on to the next hole. 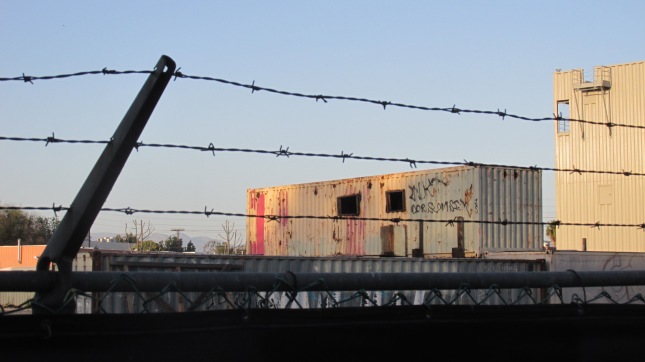 Looking through the barbed wire at the LAFD training grounds.

As the sun went down, colored lights came on. When we first arrived, we were debating whether to play one round or two. I have to admit, after eighteen holes I was exhausted. Obviously, not having played in years, I didn’t have the stamina I had when I was twelve. 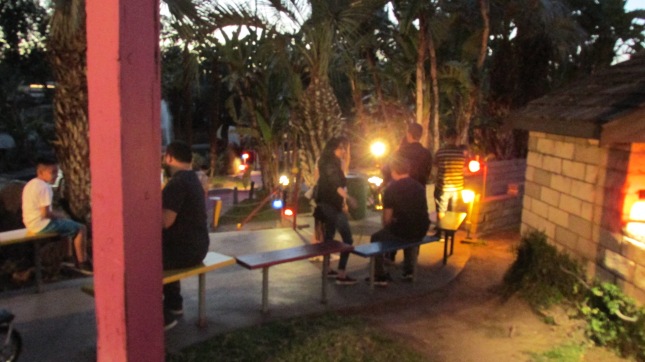 Around sunset the colored lights came on.

Finally, we added up the score and turned in our clubs. The game was over. But it was great to forget about the real world, even for a little while. 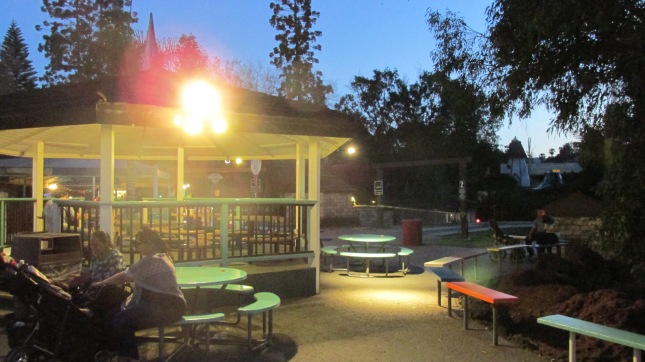 2 thoughts on “This Sporting Life”