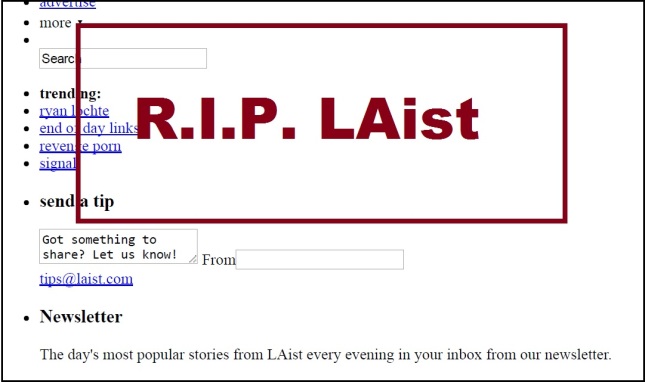 You may have already heard that the local news web site LAist has been shut down. This was actually part of a larger move by the new owner of DNAinfo, which included snuffing out sister sites in New York, Chicago, Washington DC and San Francisco.

The link below is to a piece written by Julia Wick, former editor-in-chief at LAist. I’ll let her give you the gory details. But as sad as it is to see LAist go, there’s a much larger problem here than the loss of a single web site.

We’re losing local news coverage. The LA Times and the Daily News have suffered massive cutbacks, which means they’re doing much less coverage of city and county politics. The few community newspapers left are struggling to stay alive. Radio is increasingly controlled by large corporations who aren’t interested in covering local news. And forget about TV. They’re so caught up in crime videos and celebrity gossip they hardly pay attention to what’s going on at City Hall or in our schools.

This is a serious problem, because we’re less and less aware of what’s going on around us. Voter turnout has been declining for decades, I think in part because people don’t even know what the issues are. Decreasing public awareness of issues that impact our lives makes it easier for politicians and other power brokers to bend and break the law.

And don’t tell me the internet is going to solve the problem. Sure, it’s true we now have access to more news than ever before, but social media allows people to focus only on the news they want to hear. People visit the web sites that feed their appetites, requiring less and less involvement with the world around them. The people at City Hall like that. It means they don’t have to worry about public scrutiny. It leaves them free to serve the interests that fund their campaigns.

I don’t know what the solution is, but if we don’t reverse this trend, we’re going to be in worse trouble than we are now. And we’re already in a lot of trouble.

Everyone Should Fear What Happened to the Gothamist Sites