Last night I was walking down Crenshaw at dusk.  As I came up to the onramp for the Santa Monica Freeway I saw some signs fixed to a pole.  I thought the message was cool, so I pulled out my camera and snapped a few photos.. 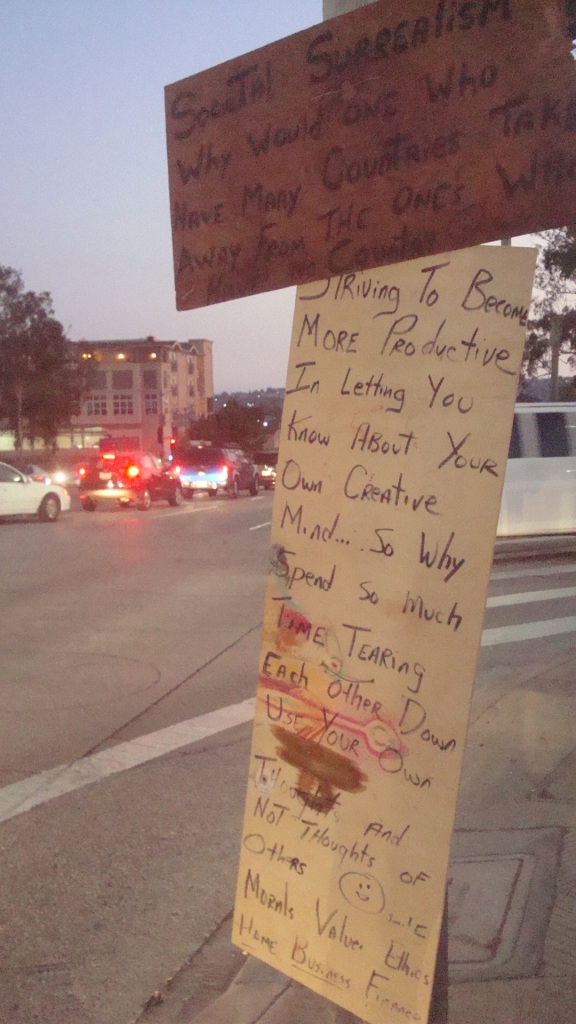 As I was taking the pictures, I wondered who put these signs up.  I didn’t have to wonder long.  He was standing a few feet away.  He came up to me and asked me why people didn’t use their creative mind.  It was a good question, and I didn’t have an answer.  We started talking.  He told me he thought the richest soil in the world was the soil you find in a cemetery, because so many people take their thoughts to the grave.

He told me his name was Lovell.  I told him I did a blog about LA, and asked if I could take his picture.  He said fine.

We probably talked for about ten minutes.  Then I said goodbye and moved on.  But I was really glad I met Lovell.  He’s interesting guy, and he’s an optimist.  He really believes people can make the world a better place if they just allow themselves to explore their own potential.

It was a message I needed to hear.  The world seems so scary these days.  There’s so much violence and hate.  So much poverty and fear.  At times it feels like there’s no hope at all.  So it was good to talk to someone who does have hope.  Someone who believes we can change things for the better, if only we can just change ourselves.