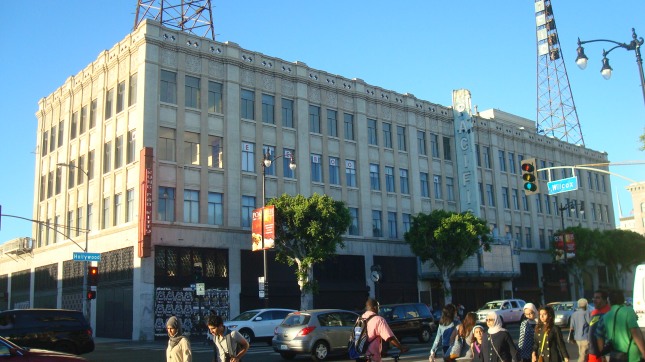 The Warner Pacific Theatre on Hollywood Blvd. has been boarded up for a while now. The church that was using the auditorium is gone, and the small retail tenants have vanished, too. Apparently the owner, Pacific Theatres, has plans for the building, though no one is sure what they are. Rumors are circulating that the plans may involve structural changes, but at this point nothing specific has been announced.

The fear is that Pacific will make changes to the theatre that would compromise its historic status. The Warner Pacific Theatre is part of the Hollywood Boulevard Commercial and Entertainment District, No. 85000704 on the National Register of Historic Places. This stretch of the boulevard contains a number of movie palaces, and is an important cultural resource for the community. The Chinese, the El Capitan, the Egyptian and the Pantages are all found in this area.

I understand that Pacific needs to make a profit, but it would be a shame if their plans did not make the preservation of the theatre’s historic status a priority. There are numerous examples of classic theatres that have been restored over the years, and many have them are very profitable. The El Capitan has been spectacularly successful since its restoration, and still functions as a first-run theatre. The Pantages has been drawing crowds consistently since it was converted to host live stage shows. The Wiltern is an example of a classic theatre that has become a hot venue for concerts.

Pacific can even look to its own recent history to back up the argument for preservation. In the nineties they announced a plan for the Cinerama Dome that would have included gutting the theatre and putting a restaurant in the lobby. The preservation community was outraged, and to their credit, Pacific listened. They changed course, and built the Arclight, which has become a mecca for movie lovers in the Hollywood area.

For more information about the Warner Pacific Theatre, you can visit the Hollywood Heritage web site by clicking the link below. Choose Preservation Issues from the menu on the left, and then click on Endangered Buildings.